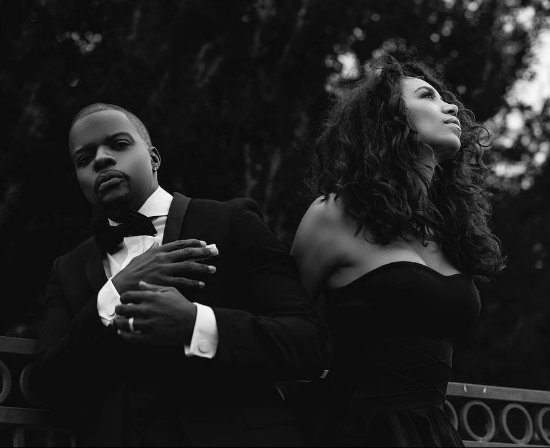 Ricky Bell has been melting our hearts and helping us break a sweat as a member of New Edition and Bell Biv Devoe for over 40 years now. Over the years, he's lent his voice to classics such as New Edition's "Can You Stand the Rain?" and BBD's "Poison" providing fans with multiple opportunities for car singalongs and dance-offs among friends. Now, Bell returns with a new project that finds him stepping away from his longtime cohorts and turning his attention to another important relationship in his life — the one with his wife of 14 years, Amy Correa Bell. The two unite for the heartfelt ballad, "Gold," giving fans a chance to uncover another side of Bell.

The sweeping ballad finds the couple serenading each other backed by acoustic guitar and a delicate string arrangement. Produced by BOZGO, "Gold" was originally intended to be an urban pop song. However, after writing the song's demo using an acoustic guitar, the husband-and-wife team realized that it was perfect as it is and decided to stick with it. The result is a song that is destined to be played at multiple weddings and receptions around the world thanks to its heartfelt lyrics about the value of cherishing that special one amidst the ups-and-downs of love. "If you ever lose the feeling / And you think you're all alone / Know that I am always with you / No matter where you go," the Bells sing in perfect harmony.

In a recent interview, Bell explained why he was moved to finally team up with his wife after watching her grow and develop as an artist over the years. "I was blown away, she really discovered herself and who she was as an artist. I was a fan! And I wanted to be a part of it. I thought the first song she should put out was a song of us together," he explained about the project. The natural development of the song is evident in the effortlessness of the sentiment delivered. However, "Gold" is more than just an expression of the Bells' love; it also benefits a worthy cause with all proceeds benefiting Direct Relief, a humanitarian organization whose mission is to provide aid to those directly affected by poverty and emergencies.

Stream "Gold" and watch the lyric video for "Gold" below, and decide for yourself if these lovebirds make you want to fall in love, too. "Gold" is currently available for purchase on Amazon, iTunes or Google Play.


TAGS:  Amy Correa Bell, audio, bell biv devoe, BOZGO, new edition, ricky bell
Previous: Sade’s First New Song In 8 Years Will Appear On ‘A Wrinkle In Time’ Soundtrack Next: Cassandra Lucas Makes It Known Whose It Is On ‘Name On It’