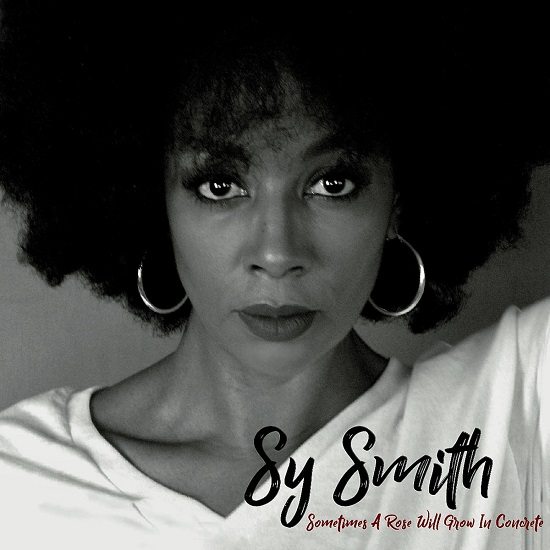 Sy Smith has been giving us her unique spin on soul and R&B for nearly 20 years now. Somehow the talented singer/songwriter has managed to surprise and thrill us with each new endeavor, keep us on our toes in anticipation of what she'll be doing next. Sometimes, though, the most revolutionary and inventive thing that one can do is come straight from the heart. That's exactly what Sy does with her fifth studio album, Sometimes A Rose Will Grow In Concrete.

In the past, Sy has veered toward the futuristic, offered throwbacks to R&B's classic eras and even dove headfirst into jazz. She stays in the here and now for Sometimes A Rose, however, settling into full singer/songwriter mode as the entire project was written and produced by Smith herself. She engages her audience with intimate arrangements and meaningful lyrics as she touches on different aspects of love and existence as a black woman. Romance is definitely heavy on Sy's mind, as she devotes five of the album's tracks (and a prelude) to the subject. It begins with the jazzy, bass-led "Perspective," which slinks and shimmies with a deliciously playful and electric groove that's the perfect intro. She hits us with several other lovely tunes about love, including standouts "Camelot," "Closer Than You Know" and the lead single "Now and Later."

But Sy's not content to just focus on love without grappling with the world around her. The first inkling of this is on "We Were Never Free," a track reminiscent of Minnie Riperton soundwise but closer in line with What's Going On-era Marvin Gaye in message as she discusses the horrors behind the beauty we sometimes take for granted. She follows that up with "Catastrophe," a syncopated jam expansive in sound that opens with news reports of devastation from natural disasters before transporting us with lush chords and syncopated percussion. The pièce de résistance, though, is the set's title track. Evoking Tupac Shakur (and at times Maya Angelou), she contemplates black existence in a world that seems to present them with the harshest realities. However, despite the piled-on adversity, she marvels at the beauty and resilience that causes black people — and especially black women — to flourish and bloom all the same.

There's not a bad track to be heard on Sometimes A Rose Will Grow In Concrete, a testament to Sy's command of her craft and her approach to her artistry. This is one rose that seems to never cease blooming. Stream it in full below and pick the album from your choice of digital retailer today.