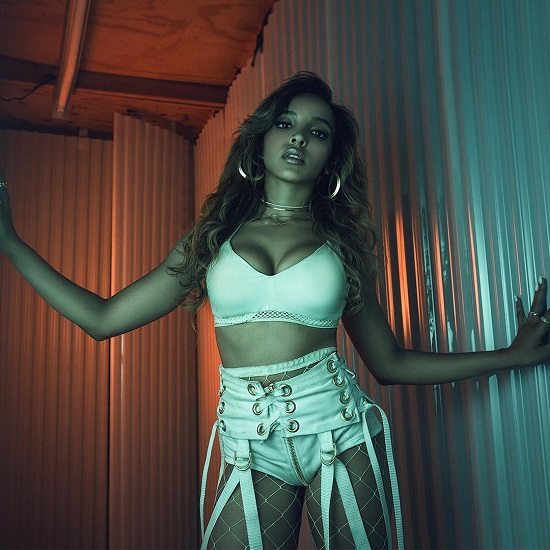 Tinashe is hitting the promo trail for long-delayed sophomore set Joyride, even though the album still hasn't secured a concrete release date just yet. The singer isn't letting that little detail slow her momentum, though. Just last week, she dropped her second single of the year, the Future-featuring "Faded Love." She's not wasting time in giving us a visual for the track, either, recently dropping what she's dubbed a "vertical video" for the sexy track.

What makes this a vertical video, you ask? Well, it looks to have been shot in portrait mode rather than landscape. This means that rather than have the black bars on the top and bottom of the screen, they're on the sides, putting all the focus on our girl T. Don't worry, though, as she gives us a titillating show that's sure to keep all eyes on her. We first see her on the floor of what appears to be a warehouse as the song begins to play. The camera pans over her body, which is draped in a revealing all-white 'fit that leaves precious little to the imagination. Once the verse starts, however, it's really showtime. Tinashe proceeds to wind, grind, pop, drop and gyrate to her tune with reckless abandon as the camera ogles her every curve and movement. In fact, it's so easy to get lost in her performance that you almost don't notice that Future is nowhere to be found in the clip (not that he's needed here anyway).

Tinashe has teased that she'll be releasing one more single, "Me So Bad," soon. We must admit that we're intrigued to hear what that one will sound like (and we're hoping it will bring with it a date we can expect Joyride to be released). Before she unleashes that one on to the world, watch Tinashe get sexy all by her damn self in "Faded Love" right here.


TAGS:  Future, Tinashe
Previous: This Week In SoulBounce: Drake Is Killin’ ‘Em With Kindness, Solange Receives Honors From Harvard, Kendrick Lamar Accused Of Artistic Theft & More Next: Mya Sexes Things Up With ‘You Got Me’