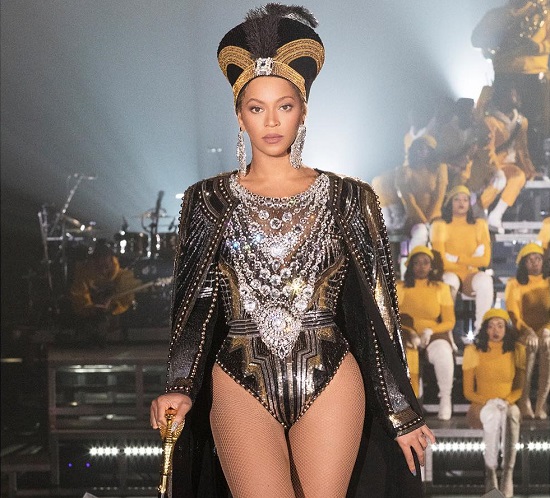 Coachella wasn't ready, and honestly neither were we. Everyone was wondering how Beyoncé was gonna kill it when she took the stage as the first black female headliner of one of the biggest music festivals in the world. But what never crossed our minds was how beautifully black it would all be.

Rather than do a typical performance of all her hits, Bey decided to wrap her performance in the concept of an HBCU homecoming weekend. Think Spike Lee's School Daze or halftime at a Southwestern Athletic Conference bowl game. Queen Bey, of course, played drum major as she opened the set in a black-and-gold cape and leotard number that channeled both Nefertiti and Phyllis Hyman before she did several quick changes during her two-hour set as a full marching band (complete with majorettes and a dance team) held her down on the sound and the moves. They went through everything from "Crazy In Love" to "Partition" to "Don't Hurt Yourself" (and she even took time to sing the black national anthem "Lift Ev'ry Voice And Sing") with intricate choreography and arrangements that made this a performance for all to remember.

And that was just Bey on the solo tip. She also kept things rocking by inviting special guests like hubby JAY-Z and lil' sister Solange on stage for her B'Day tracks "Deja Vu" and "Get Me Bodied," respectively. But the big moment came with a Destiny's Child reunion as Bey and former bandmates Kelly Rowland and Michelle Williams went through a medley of their past hits like "Lose My Breath," "Say My Name" and "Soldier."

Quite honestly, Beyhive member or nah, you can't deny that Beyoncé is the pacesetting performer of her generation. Check out her full performance below as we contemplate how she'll top herself for Coachella's second weekend.


TAGS:  beyoncé, jay-z, kelly rowland", michelle williams, phyllis hyman, solange
Previous: This Week In SoulBounce: Janet Jackson Wants You To Dance With Her, Mariah Carey Reveals She Has Bipolar Disorder, Cardi B’s Glow Up Won’t Slow Up & More Next: Janelle Monáe Gives Some Insight Into Who She Is On ‘I Like That’