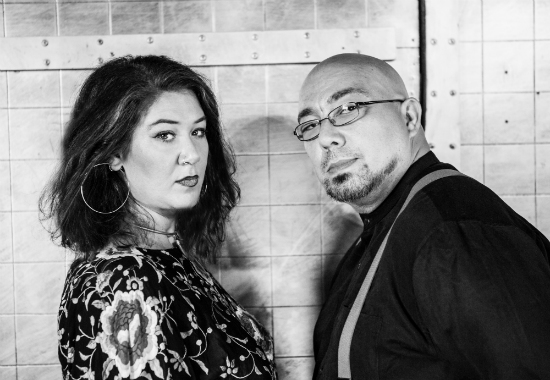 Diana Purim didn't choose a life in music, it chose her. As the daughter of renowned Brazilian jazz singer Flora Purim and percussionist Airto Moreira, it was her destiny to follow in her parents' footsteps. She grew up traveling the world with them on tour and made a friend in Krishna Booker, a fellow child of a musician, bassist Walter Booker (in addition to being Wayne Shorter's nephew and Herbie Hancock's godson). That friendship blossomed into romance, with Diana and Krishna eventually united in both love and music. Together the husband and wife team are the core of the group Diana Purim & Eyedentity, which formed in 1997. Over the years they have honed in on a signature sound that is a fusion of jazz, funk, Brazilian and Latin music. These various styles will be showcased on their upcoming album, Many Bodies, One Mind. To get an idea of what to expect, SoulBounce is delighted to bring you the exclusive world premiere of the set's title track.

"Many Bodies, One Mind" is a song about the artistic struggle that many artists face, "to achieve freedom of self-expression and the courage and beauty of the creative process." Co-written by the couple, Booker also wore many more hats, including producer, composer, drummer/percussionist and vocalist. He can be heard rapping alongside his songbird wife atop a rhythmic foundation of bass, guitar, percussion, cuica, trombone and strings played and arranged by none other than Miguel Atwood Ferguson. The song is an aural feast and simply feels good. Wherever you are and whatever you are doing, it will take you on a musical journey from the United States with a head nod to Brazil with a hip sway from the moment you press play.

"African American and Afro Brazilian music and culture have offered so much to the U.S. and Brazil," Diana and Krishna shared with us about the song's deeper roots. "Even though these two tribes of slaves never met each other, they possess a kinship through music and spirituality that is surpassed by none! This combined with the Buddhist concept, 'Many in body but one in mind' are the main inspirations of this song."

After listening to "Many Bodies, One Mind" the song, be sure to add the album Many Bodies, One Mind to your shopping lists when it's released on May 18th. Diana Purim & Eyedentity will celebrate the album's arrival with a release concert at The Virgil in Los Angeles on May 19th. Stay in the loop with the group and all their happenings by following them on Facebook, Twitter and Instagram.


TAGS:  Airto Moreira, audio, Diana Purim, Diana Purim & Eyedentity, Eyedentity, Flora Purim, herbie hancock, Krishna Booker, miguel atwood-ferguson", Walter Booker, Wayne Shorter
Previous: Mya Is Down To Go Round For Round On ‘Knock You Out’ Next: ‘Dear White People’ Is Coming Back With Some Issues For Season 2