Tori Kelly & The Hamiltones Want To ‘Help Us To Love’ 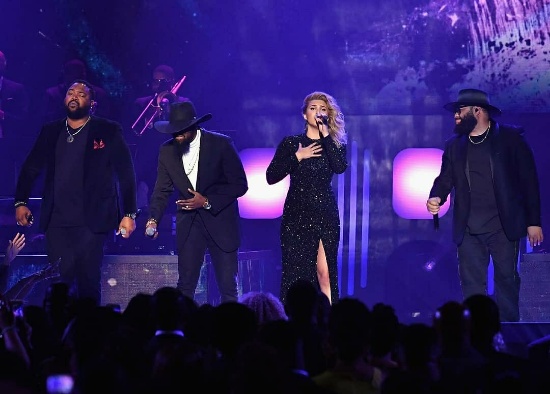 Tori Kelly is known as a voice to be reckoned with. The YouTube star turned GRAMMY-nominated singer/songwriter has amazing vocal games that refuses to be denied, whether she's on record or singing live. If she wasn’t stirring your spirit before, she'll definitely move you with her latest number, the inspirational track “Help Us To Love,” featuring The Hamiltones. Yes, those Hamiltones.

Written and produced by Kirk Franklin, "Help Us To Love" is about having the same kind of love as God for your fellow man. Over folksy production of church organ, drums and synths, we get an inspirational message of truly loving your neighbor: “Love died somewhere behind that cross you wear / You're afraid when you look at me / That ain't real love / Not the kind from above.” As expected, Tori does justice to Franklin’s words and so do her co-stars. They provide background vocals, but the trio is still front and center in the song. Their incomparable and unmistakable harmonies, honed from years of backing up Anthony Hamilton, provide a solid foundation for Tori’s own powerhouse vocals.

“I grew up on gospel music, so the fact that a legend like Kirk Franklin would take me under his wing was just a dream come true,” said Kelly. “He genuinely cares for people and the warm environment he created really helped me to be able to pour my heart into this song.”

“Help Us To Love” made its live debut at this year’s Stellar Awards, a celebration honoring gospel music artists, writers and industry professionals. The crowd was amazed and overwhelmed before Tori even got started. Wearing a sparkling full-length black gown against a dark backdrop with purple lighting, she shared her love for a friend named Jesus and inspired us to do the same. Meanwhile, 2E, J. Vito and Tony Lelo flanked the star in black suits and worked the crowd with their pitch-perfect harmonies that sounded like a full choir was on stage. The end result was truly a religious experience.

“Help Us To Love” will be featured on Tori Kelly’s upcoming sophomore album, the follow-up to her 2015 debut, Unbreakable Smile. We’re also anticipating the debut album from The Hamiltones to premiere sometime this year, hopefully, sooner rather than later.


TAGS:  2E, anthony hamilton, audio, J.Vito, kirk franklin, The Hamiltones, Tony Lelo, tori kelly
Previous: Rob Milton & Kreion Discuss The End Of A Relationship On ‘Almost Cried (I Tried)’ Next: This Week In SoulBounce: Rihanna Is Digitally Certified, Safaree Gets Got, DMX Has To Pay Up & More