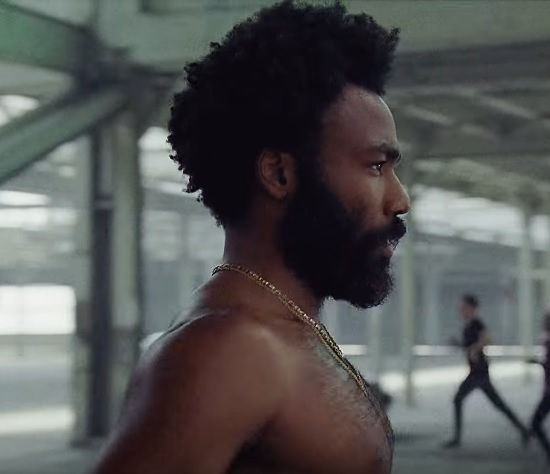 Many were anticipating the Saturday Night Live debut of award-winning actor/comedian Donald Glover and his musical alter ego Childish Gambino. However, what they didn't bargain for was what he'd be bringing to the stage at Studio H. While the comedic side of Donald was on full display during the show's many skits, he also made a huge impact during his musical performances. While most expected him to give us tracks from his GRAMMY-winning album Awaken, My Love! he instead gave the audience two brand new tracks — "Saturdays" and "This Is America" — from what we're assuming is an upcoming project. Not only that, but he also dropped off a provocative clip for "This Is America" that has had the internet going nuts since its arrival.

For his first SNL set, Zoe Kravitz introduced Gambino before he launched into his new track "Saturdays," a breezy, feel-good song that's more than a little influenced by early '80s disco and R&B. While Gambino, who rocked an open sheer shirt and patterned trousers for the occasion, breezed through the rhythm guitars and twinkling chords, extras on the stage (including Zoe) looked to be having the blackest celebration on national television — including red cups we assume were filled with brown liquor and playing dominos. After giving the audience dreamy R&B grooves, Gambino took the set home with a dance break that included drums that sounded straight out of carnival in Rio.

Of course, he came back to deliver "This Is America," a song that utilizes trap, gospel and other elements to deliver a scathing but truthful indictment on America's gun culture and how it affects the black community. With five kids in school uniforms at his side doing all kinds of dances, a shirtless Gambino switched between stoic and joyful as he performed. It's similar to what's found in the song's video, which he released simultaneously with his appearance on the sketch comedy show, but on a smaller scale.

Oh, but can we talk about the video? The internet has been in hot debate over what exactly all the symbolism means, but Gambino is definitely making a statement in it. It begins with a man sitting in a chair strumming a guitar as the track begins playing. We then see CG shirtless and dancing as he makes his way over to the chair, the man's head now covered by a hood, before he removes a gun from his trousers and shoots the man in the head. Before the viewer can even gather what just happened, the gun is carefully carted away, the man's body is unceremoniously dragged off camera and Donald easily flows back into rapping and dancing. He's soon joined by a group of schoolchildren, who cut a rug with him while utter chaos breaks out in the background (we're talking riots, beatings and police raids). None of that phases Gambino, who continues dancing with the children despite the madness. He eventually mows down a choir with an automatic rifle — the gun and bodies being handled the same ways — and then goes on to dance on top of a car while SZA sits on the hood of another and watches. The clip fades to black before showing him running down a dark tunnel as a mob of what appears to be white men chase him down.

There are many theories about what the Hiro Murai-directed video could mean, including the social implications of certain scenes, but so far it's all being left up to interpretation. Get a peek at the "This Is America" video below and then check out the R&B groove of "Saturdays" and his live performance of "This Is America" on SNL on the next page. 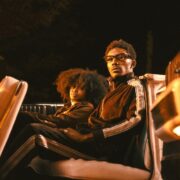