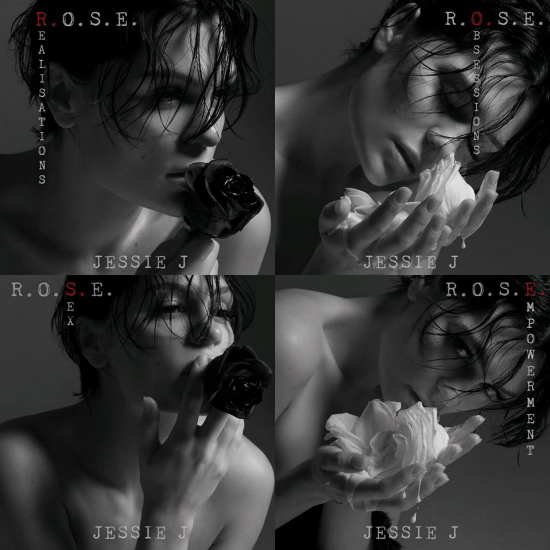 A clear fan of the slow burn, British songstress Jessie J recently released her new album R.O.S.E. via an unconventional rollout, serving up the album in four volumes. Each volume of R.O.S.E. features four songs for a total of 16 new tracks to groove to. She released all four parts — Realisations, Obsessions, Sex and Empowerment — this week, each adding its own special layer to the singer's new musical bouquet. About creating R.O.S.E., Jessie clarified why she chose each word, saying that they were "[the] four words that my feelings fell into during the time of writing this record." Now that we have our hands on all four parts, we listened to them the way they were released.

R.O.S.E. (Realisations) starts off on the deeper end with "Oh Lord," giving us the best of Jessie in the form of a ballad. The first volume also includes standout uptempo track "Dopamine," a commentary on our modern day addictions, which range from technology to pain. On "Think About That," the first release from  R.O.S.E., Jessie uses the rasp in her voice to express her past frustrations with being an artist. The first installation of her album ends with her pleading for a little mercy on the breezy "Easy On Me."

With R.O.S.E. (Obsessions), Jessie kicks things off with her beautiful vocals over a strong hip-hop beat on "Real Deal." She addresses a relationship with some strong chemistry that comes through in her vocals. Digging further into the second installment, we can tell this is the nice and nasty arm of her project. On the second track, "Petty," Jessie sings about a fake friend ever so sweetly, using percussion and synth as a foundation for her good read. This is also the case when it comes to "Not My Ex." She caps it off with "Four Letter Word," an unexpected and introspective slow jam about wanting to be a mother (which she addressed on Instagram on Mother's Day) that showcases Jessie's runs perfectly.

R.O.S.E. (Sex) starts off with "Queen," the powerful track and new anthem for loving on yourself. You can probably guess that this third installment of the album is about all things physical. With "One Night Lover," Jessie addresses abuse and being taken advantage of, ultimately declaring, "I can't be your one-night lover." On "Dangerous" she gives us some Michael Jackson vibes as she sings about a sexy lover. She ends the installment with an upbeat ditty sampling Cheryl Lynn's "Got To Be Real," giving us disco realness as she expresses her feelings for a man.

Jessie ends the 16-track album with R.O.S.E. (Empowerment), where she's sure to make you feel something. She gives us some gospel in "Glory," which will have you up on your feet if you let her voice and spirit move you. With "Rose Challenge," Jessie slows things down for just a minute to give us some sweet keys that lead us into the soulful and bluesy ballad "Someone's Lady." The final track of the album, "I Believe In Love," delivers R&B with elements of gospel to leave you with that extra push to keep going.

Using her sassy tone, Jessie paints a clear picture of where she stands in her relationships. And with her powerhouse vocals, its an easy, enjoyable listen. To celebrate the release of the album, Jessie J, along with a few beautiful queens, performed on The Late Late Show With James Corden. You can get your copy of R.O.S.E. now from your favorite digital retailer and let us know which part of her new flower you like best. Stream each volume of R.O.S.E. below and watch the songstress belt out her single "Queen" on late-night TV below.