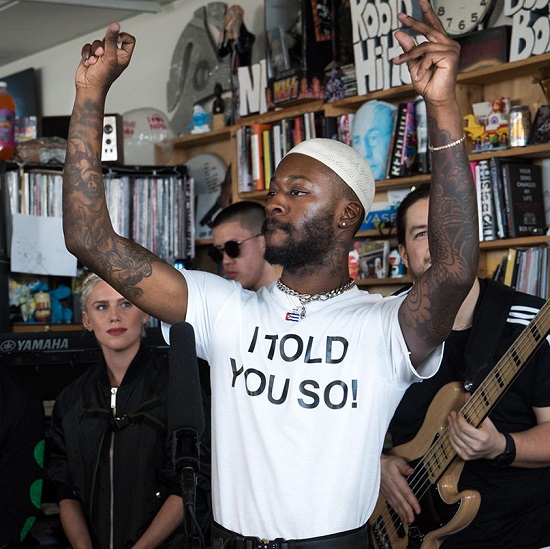 GoldLink has been a busy boy. After logging in solid collaborations with Christina Aguilera and Tom Misch this year, he's giving us another collaboration to enjoy. This time he links up with R&B bad boy Miguel for his brand new single "Got Friends."

"Got Friends" finds the rapper employing his sing-songy flow over a cool, summery beat that puts us in the mind of his last summer hit "Crew." However, this go 'round things are a tad warmer as he raps about getting with the fairer sex over a laid-back groove perfect for bumping in your car or jamming in your headphones. Punctuating his verses is Miguel's chorus, which lets us know what kind of girls they're running with. "All of my b*****s got friends," he sings, "And they bad, they bad, so we're good." While not necessarily the most progressive lyrics, for the fellas it makes the equation for a good night.

In addition to "Got Friends," the rapper's Tiny Desk Concert at NPR's offices was also released to the masses. The set found him doing a stripped-down four-song career retrospective. He led the set off with God Complex's "Bedtime Story" before taking us into And After That We Didn't Talk territory with undeniable jam "Dark Skin Women." Both lent themselves well to the live arrangements, with the musicians and backing vocalists bringing the tracks to life. He then shifted focus to At What Cost with songs "Some Girls" and "Pray Everyday (Survivor's Guilt)," giving the former a bit of comedy while letting the audience know he wrote it about an ex and letting poet Kelow deliver her fiery preface to the latter. Though only four songs long, this was another dope performance showing that GoldLink is here to stay.

Check out both "Got Friends" and his Tiny Desk performance below. Also, if you're in the DMV, be sure to catch his three-night stand at DC's U Street Music Hall later next month.