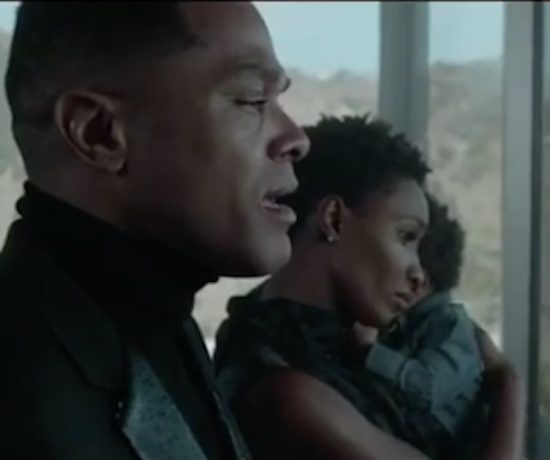 For the past couple of years, the world has always seemed on the verge of self-destructing. With the threat of war seemingly at every turn, it's safe to say that many of us have been living on the edge of our seats. Singer Maxwell returns with a new single and short film that makes that fear all too real. "We Never Saw It Coming" provides the soundtrack for the painfully timely Bush+Renz-directed film, "The Glass House."

Based on the teaser clips he posted to Instagram, it seems that he is mourning a relationship's demise on the new song. In actuality, he is mourning the breakdown of humanity on the sobering and heartwrenching ballad. Backed simply by strings and synths, the sparsely produced track allows the crooner's emotionally ragged vocals to take center stage. "We've never been so divided, scattered and spread among / Like useless ashes, the Phoenix overcomes / And what can I do? I know it's all uncontrollable," he sings, his voice filled with a mixture of pain and frustration.

He drives home the song's politically-charged message in "The Glass House," the short film that he first named dropped on social media last month that premiered exclusively on TIDAL this week. In the beautifully heart-stopping video, we see Maxwell, his pregnant wife and their small child at home in their literal house made of glass as they go through the motions before their world is shattered. It doesn't take long to see what brought an end to what seems to be an otherwise normal day. As they stand together at the window, they calmly watch a mushroom cloud overtake downtown Los Angeles and head their way. Their seeming resignation paints an eery and heart-wrenching picture as they await what appears to be inevitable destruction.

The new song is presumably taken from the third and final installment of his album trilogy, NIGHT, which was preceded by 2009's BLACKsummers'night and 2016's blackSUMMERS'night. Although no release date has been released yet for the album, Maxwell will be hosting his "Black Summer' Night of Social Justice" on Saturday, August 11th at Forest Hills Stadium in Queens, NY. Announced earlier this year, the one-night event is set to feature performances by Fantasia, DVSN, Jazmine Sullivan and more. Proceeds from the event will benefit the Me Too movement, Southern Poverty Law Center and several other organizations. Tickets for the event can be purchased via AXS. In the meantime, take a listen to Maxwell's latest song below and get a preview of the TIDAL-exclusive video, which will be available on other platforms next week.