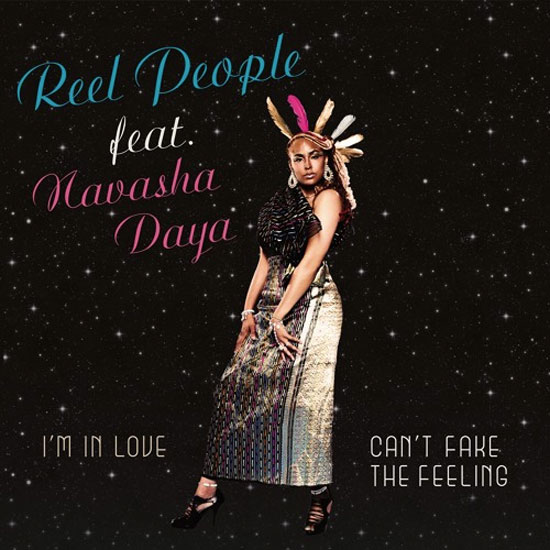 Reel People are back with another series of covers. This time around, they re-worked Evelyn “Champagne” King’s “I’m In Love” and Geraldine Hunt’s “Can't Fake The Feeling.” For the double singles, they tagged in Navasha Daya, solo artist and former lead singer and founding member of Fertile Ground. This is their first time working together, and they’re making it count. Earlier this year, the singles were released as limited edition 12” vinyl releases during UK’s Record Store Day 2018. To our delight, full versions of both singles are now available on digital platforms.

For those familiar with the original tunes, you’ll hear that Daya sprinkled her magic on both with her unique tone and style. Her alluring voice draws listeners in with its fullness and flare. The soulful songstress used different inflections here and there across both but stayed faithful to what disco goddesses King and Hunt originally laid down in the '80s.

Reel People and Navasha Daya take us on a sonic blast from the past with these two covers but bring them into the here and now with their renditions. On their take of “I’m In Love” there’s a heightened synth line under the melody creating more nuance and flare to the modernized arrangement. Mixing from John Morales on “Can’t Fake The Feeling” adds a punctuated bop to the already funky track.

Slip on your dancing shoes and go on a nostalgic ride with Reel People and Navasha Daya's collaboration on "I'm In Love" and "Can't Fake The Feeling." Both tracks are available for purchase now and will also find a home on Reel People's upcoming album Retroflection, which is due for an October release and will feature their twist on classic soul and disco records from the late-1970s and' 80s.


TAGS:  audio, evelyn "champagne" king, Geraldine Hunt, navasha daya", reel people
Previous: GoldLink Links Up With Miguel For ‘Got Friends’ & Has A DMV Homecoming At NPR Music’s ‘Tiny Desk Concert’ Series Next: NAO Laments The End Of A Relationship In ‘Another Lifetime’