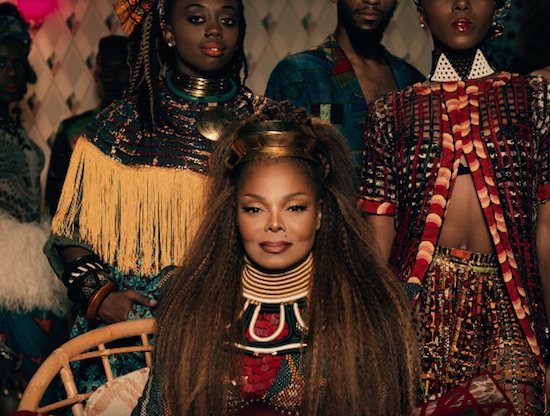 Janet Jackson has been a trailblazer her entire career but she's really been on one as of late. Just when we thought she'd wrapped up her State Of World Tour last year, she hit us with yet another leg of the trek and even revamped the previous leg's setlist. As that winds down, Miss Janet isn't resting on her well-deserved laurels. Instead, she's kickstarting her next era with her brand new single "Made For Now" and its eclectic new video.

"Made For Now" is a call to action of sorts. Janet commands us all to live in the moment instead of worrying about the past or the future. "If you're living for the moment / Don't stop / Gotta celebrate the feelin' / Go up," she sings on the verse in her signature soprano. Meanwhile, the Harmony Samuels-produced track aims for international flair with a groove that incorporates elements of soca, Afrobeat and reggaeton. The latter explains the inclusion of the track's guest Daddy Yankee, who pops in for a quick verse and a few ad-libs to keep the party going.

The Dave Meyers-directed clip for the song builds on the international vibe. We see Janet walking through the streets of New York in several eccentric fashions, each showcasing her uncanny ability to pull off any look thrown at her. Meanwhile, everyone around her is outfitted in bold colors and African prints. Yankee is, of course, in tow to help keep things spicy, as are Samuels, Janet's trainer Paulette Sybliss and background singer Rebecca James. It all culminates with Janet surrounded by dancers while looking exceptionally regal for the video's final shot.

"Made For Now" is available for purchase and streaming now on all platforms and is the first salvo from an upcoming album. As with all things Janet Jackson these days, we're waiting to get details about the upcoming project from her lips and her lips only. While we wait for what's to come, live in the moment with Janet and Daddy Yankee in the "Made For Now" video below.