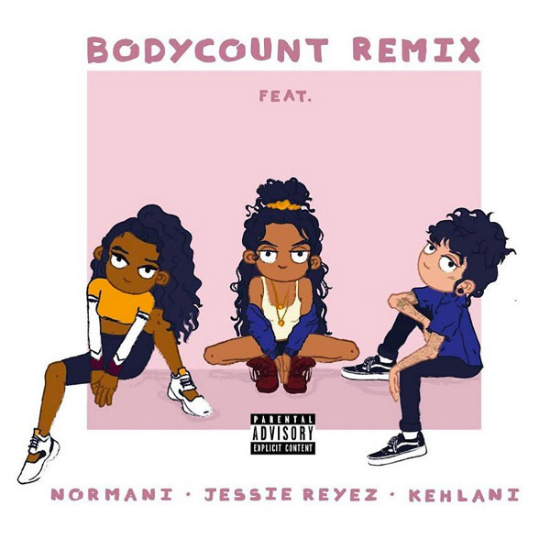 When Jessie Reyez released “Body Count,” a catchy number about respecting a woman’s right to explore her sexuality, we found ourselves bobbing our heads in agreement to the funky groove. As a woman’s empowerment anthem, it would only be right to let a few other women rock the mic with. Jessie does just that on the remix where she shares the floor with a few other R&B starlets. Joining Reyez on the refix are Normani Kordei of formerly of Fifth Harmony and Kehlani, who grace the track with their own unique style and a few eyebrow-raising lyrics.

The track begins with Jesse singing the chorus like she does on the original. However, after she shouts, “I dodge d**k on the daily,” she passes the mic to her co-stars. Normani comes through with a sing-song trap flow, letting dudes know that they need to show women respect and that she likes her man much better when he’s quiet and on his knees. Not to be outdone, Kehlani comes through exclaiming, “I dodged d**k for some p***y.” But don’t get it twisted, it’s not for the male gaze but her own prerogative and enjoyment.

“Body Count” was a funny little ditty before, but the addition of Normani and Kehlani turns the playful track into a certified bop. Normani and Kehlani effortlessly flex their skills over the track, enhancing what Jessie Reyez created. The song is risqué and not exactly what you would expect from a group of R&B chicks, but hit play and let us know if the ladies bodied this remix.