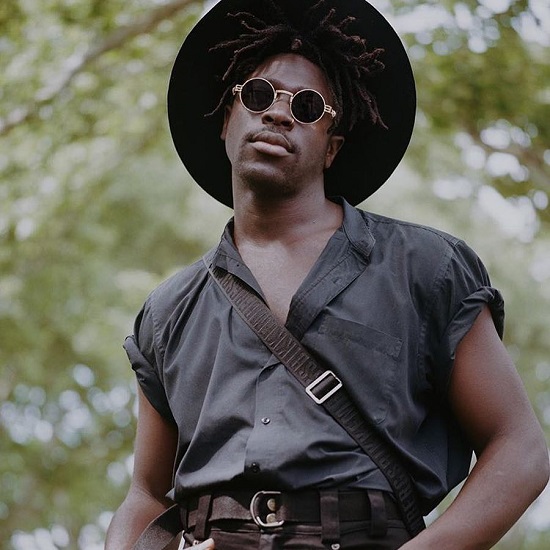 Though he'd been bubbling under for quite some time before its release, Moses Sumney's debut Aromanticism still managed to take everyone by surprise. His unorthodox approach to R&B songwriting and subject matter, stripping romantic love from the equation while still leaning on the genre's tropes, made the album a must-listen while its dreamy soundscapes kept it in constant rotation. After gifting us with a remix EP for his single"Make Out In My Car," Moses has announced that he has yet another EP — Black In Deep Red, 2014 — coming this year and that it's set to arrive next week. As if that weren't enough to take in, he's giving us a first listen to the three-song project with his single "Rank & File."

As its title would suggest, "Rank & File" has a militaristic vibe to it. A marching beat accentuated by the click of snaps serves as the basis of the song's rhythm. The rest of the song's sounds are built around that feel as haunting synths, vocal samples and the occasional inclusion of electric guitar are included. Moses fills the rest of the space with his own vocals, from low moans to high-pitched wails, as he criticizes what he calls the "police state." It's fitting, as Black In Deep Red, 2014 is inspired by his attendance of a protest soon after the 2014 fatal shooting of Mike Brown. "I felt like a camouflaged outsider at the protest, like an anthropologist performing a study amongst his own kind," he told The 405. "I took to the mountains soon after that and wrote these songs, wondering if power was a transferable device that could change hands through the vocalizing of unrest."

It seems like the new EP looks to show us a different side to Moses Sumney than the lush, polished sound we received on Aromanticism. We'll find it out when it arrives on August 10th. Prepare yourself for what's in store by giving "Rank & File" a listen right here.


TAGS:  audio, Moses Sumney
Previous: Lil’ Kim Shows Us Why She’s A ‘Nasty One’ Next: B5 Is Ready To ‘Do That’ With Comeback Single & New EP