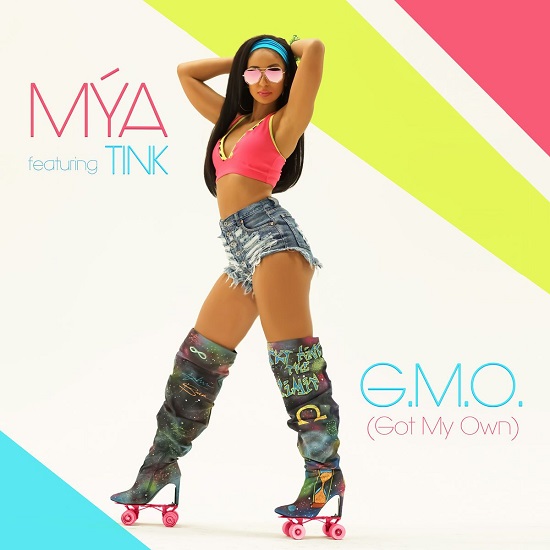 Mya broke us off a little sumthin' sumthin' with the release of her seriously sexy 13th album T.K.O. earlier this year. But that was then and this is now. As she so eloquently said on Instagram, "Just gave y’all 2 solid #rnb albums #SmooveJones & #TKO. Now it’s time for some turn up." And damn if she doesn't deliver the turn up and the girl power with her latest single "G.M.O. (Got My Own)."

The track knocks from jump thanks to larger than life synth bass and trappy programmed drums that are sure to bang in your speakers. Riding the beat like the seasoned pro she is, Mya immediately gets to business on the chorus. "Don't need money / Got my own / I got bags / Bags to blow," she sings. "Hold up, boy / I don't need dough / But you can spend it / On me if you want." She continues dripping sauce as she flexes her ducats and just what she can do with it. She's not alone in her efforts, though, as rapper/singer Tink is on hand to help her floss on all the dudes who step incorrectly. "Young and I got my own / N***as on that 'cause my body on grown," she spits on her verse, though she let's be known that she, too, would rather spend yours if you're willing to trick. After showing off her sultry side two albums straight, this is a bit of departure — though we're not necessarily mad at the switch up.

Bounce along with Mya and Tink's new jam when you press play below.


TAGS:  audio, mya, Tink
Previous: Gallant Struggles With Fame On ‘Haha No One Can Hear You!’ Next: Enjoy A Night Of ‘Elegance’ With Kilo Kish