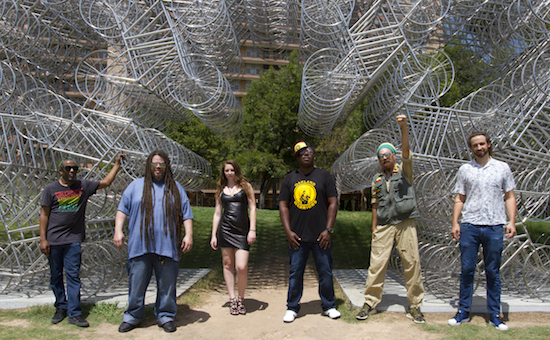 Texas has a deep and rich musical history, with its major cities birthing some of the most influential musicians in the world (and in one case, the world's current reigning pop queen). So it should be no surprise that tons of emerging new talent can be found almost anywhere you look. For example, Austin's own Collective Thought is set to release their debut album Rise in just over a week. The group — consisting of emcee/vocalist StormShadow, singer Kelly Hafner, rapper Project Dead, bassist Shawn Hallman, guitarist Silverback Jonz and drummer Ras Christopher Francis I — blends soul, hip-hop, reggae and dub to create a unique sound that you just have to hear. And, thanks to us, you have a chance with the premiere of their latest single "Stars."

A funky backbeat and breezy guitar riff provide the setup for "Stars," with Kelly quickly supplying the song's poetic hook, singing, "People change just like the days do / Time and space are known to rearrange you / You gotta move through space like stars." The verses are left to Project Dead and StormShadow, who provide rhymes about embracing transformation as you go through life. Just as their raps speak on progression, the music is progressive as well, with jazzy instrumentation relating to the song's cosmic theme. The song also shows off the band's chemistry with its seamless blend of each member's talents. About the song's creation and subject matter, Project Dead said, "It was the first song I wrote after I heard Kelly's voice and she joined the group. I just wanted to write something uplifting, and I was writing a lot about space at the time."

In addition to "Stars," Collective Thought has also released title track "Rise" as a single from their debut, which is set to arrive in full on September 7th. As we anticipate the release, you can follow the band via their website, Facebook and Instagram. Give "Stars" a listen below.