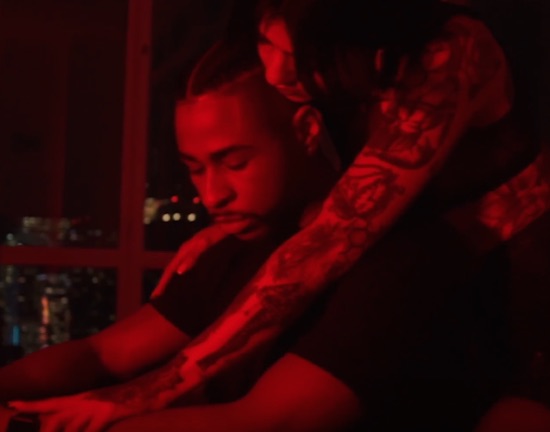 Like many independent artists, David Wayne wears many hats. For his latest single "Show Don't Tell," he wrote, produced, recorded and engineered the song by himself. He continues that DIY spirit with the song's music video, which he directed and edited with a little help from Cinemasters on the shoot. The red-hued visual matches the intensity of the song and even brings a different perspective to light to hear David tell it.

"My goal was to visualize the concept of make-up sex as it related to a personal experience of mine," he shared with us about his vision for the video. "But as I got closer to finishing the final edit I realized the visual revealed a piece of the story that the audio doesn’t speak on – the woman’s perspective." Indeed, as David sings about his struggle to commit on "Show Don't Tell," we see the push and pull between him and his leading lady in the music video. They share a very passionate encounter, but their erotic moment is underscored by their body language and facial expressions. Something is clearly off while they get it on.

"You really won’t understand the full story unless you watch the visual," he continues. "As the lyrics narrate my version of the story, the visual gives you a full view on the situation allowing you to see things from both sides of the coin and make your own opinion on what happened."

We appreciate David Wayne's interpretation of "Show Don't Tell" and invite you to watch SoulBounce's exclusive world premiere of the video below. He also promises us that there's a lot more where this came from. He has more music and visuals on the way in the coming months, so keep an eye on his socials for his upcoming releases. Follow David Wayne on his official website, Facebook, Twitter and Instagram, and check for his previously released music on SoundCloud and Spotify.


TAGS:  Cinemasters, David Wayne
Previous: Disclosure Takes Us Back To The ’80s With ‘Funky Sensation’ & ‘Love Can Be So Hard’ Next: The APX Take Us To ‘Jupiter’