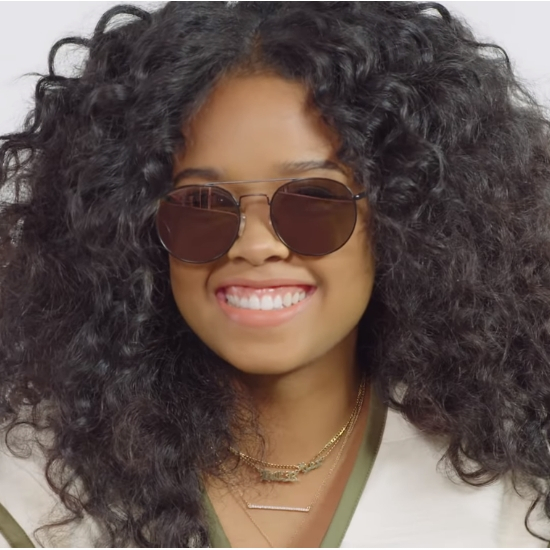 H.E.R. recently proved she's a master of games and good music when she sang her way to the top of the scoreboard over at ELLE. The 21-year-old songstress was recently put to the test when ELLE invited her to be the first guest on their new "Song Association" series. H.E.R. was given the task of singing a song based on the word she was given within an allotted time of 10 seconds. Not one to crack under pressure, the songstress was a tad nervous at first but later had no reason to be as she bodied each word they threw at her.

The game started with the word "Again," and she immediately pulled out Aaliyah's "Try Again" from her musical archives. After that she got the word "World" and busted out "Change The World" by Eric Clapton featuring Babyface. After that she went toe-to-toe with ELLE, throwing out hits from D'Angelo, Stevie Wonder, Adele, Aretha Franklin, Jazmine Sullivan and even plugged her own song "Lost Souls" from I Used To Know H.E.R.: The Prelude and her duet with Daniel Caesar "Best Part."

Now that she's the reigning queen of ELLE's "Song Association," we're curious to see who will come after her title. So far the game has attracted the likes of Queen Naija, Serayah and Ariana Grande, who all haven't made it as far as H.E.R. Watch the songstress in action yourself right here and see if you could play the game any better.