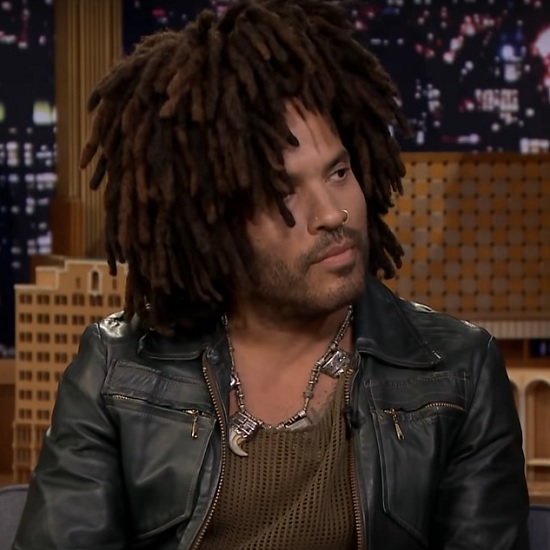 Whenever Lenny Kravitz is gracing our television screens, you'd better believe we're going to watch. That's why when he made an appearance on last night's episode of The Tonight Show Starring Jimmy Fallon we made sure to tune in. The charismatic Mr. Kravitz was on the show to promote his latest effort Raise Vibration, of course, but that didn't stop him from working his charm and delivering some fun moments throughout the night.

Lenny first came on the set for a rousing game of "Lip Sync Charades," which paired him off with his daughter Zoe Kravitz against Jimmy Fallon and the night's other guest, actress Reese Witherspoon. The two teams brought the house down as they acted out popular songs to often hilarious results. After Jimmy and Reese won the game, Lenny sat down for an interview with the host where they discussed everything from that infamous scarf photo to his ever-growing collection of rare music memorabilia, including one of Bob Dylan's harmonicas that Lenny just happened to have on him and allowed Jimmy to play. Oh, and Lenny also revealed the mind-blowing news that you are actually hearing Michael Jackson's vocals on "Low," making us love the track even more.

But of course, a musician can't make a Tonight Show appearance without gracing the stage with a song and Lenny did exactly that. He and his band performed the aforementioned "Low." The 54-year-old worked the stage like a man in his prime and looked damn good doing it. If anyone is proof that age is nothing but a number, it's the timelessly cool Mr. Kravitz.

Check out the performance of "Low" below and then stick around and for more Lenny Kravitz with interview clips and one of the funniest games of charades we've ever seen played.