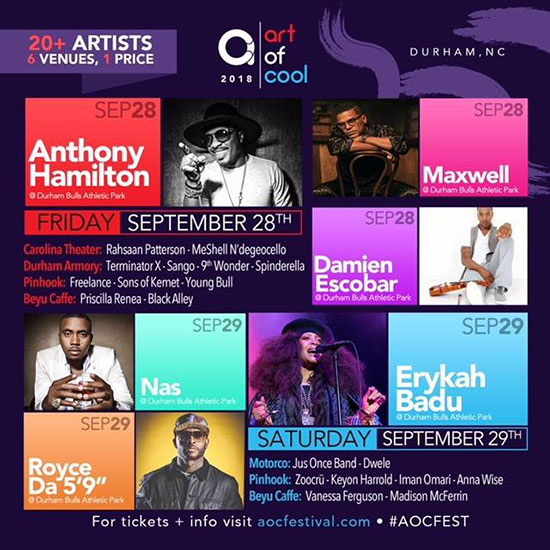 North Carolina has been going through it in recent days thanks to Hurricane Florence, but the resilient residents of the state are standing strong and carrying on in the storm's aftermath. One show that is also going on is the 2018 Art of Cool Festival, which is scheduled to celebrate its fifth anniversary during the two-day festival on Friday, September 28th and Saturday, September 29th.

Since we first reported on the festival back in April, there have been numerous additions to the artist lineup. Besides Nas, Erykah Badu and Sango, also performing will be Maxwell, Anthony Hamilton, Dwele and many more dynamic performers across R&B, soul, hip-hop and jazz. As festival season in the U.S. tapers off, we can't think of a better way to wrap things up than by attending the 2018 Art of Cool Festival.

Tickets for the 2018 Art of Cool Festival are on sale now via Eventbrite. Interested attendees can purchase tickets for either or both days and also upgrade their experience with VIP packages. SoulBounce will be in the house for the fifth anniversary of one of our favorite annual festivals, and we cannot wait to attend what we already know will be another fab weekend of music. Our friends at AOCFEST want to make sure that SoulBouncers will be in the mix to enjoy the festivities, and they've given us two pairs of tickets to give away. If you're local to Durham or can be there by next weekend, then by all means enter to win on the next page and you may just get blessed.