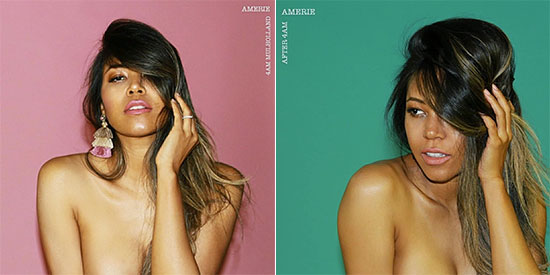 The artist formerly known as Amerie is now known as Amerie once again. After changing her stage name to Ameriie in 2010, she has decided to drop that extra "i" from her name and gone back to basics. Though that's cause for celebration from frustrated fans in and of itself, that's not even the biggest news coming from her direction. Those same fans are even happier that Amerie dropped the surprise of all surprises with the release of a double project today entitled 4AM Mulholland and After 4AM. She announced the new collection yesterday via social media and in an exclusive interview with Billboard that sent people into a #TBT frenzy reminiscing on classics like her stellar debut album, All I Have, and her hit single, "1 Thing," in anticipation. With the high bar that she's set in the past, eager fans are looking for her to meet or exceed that standard with 4AM Mulholland and After 4AM.

In the nine years since the release of her fourth studio album In Love & War, Amerie has been busy living her best life. She got married, wrote a few novels, edited an anthology, started a lifestyle channel on YouTube and just a few months ago she gave birth to her first child. Make no mistake, though, she never left music behind. The Georgetown University grad released a sporadic stream of songs during that time, with one-off singles here and there, including among them bangers such as 2014's "What I Want" and 2017's "Redrum," and the highly enjoyable EP Drive in 2016.  She even released her refix of Swae Lee's "Guatemala" a few months ago. Amerie hasn't left us wanting for new tunes.

The combination of the 4AM Mulholland and After 4AM EPs represents her first new "album" in almost a decade, however. With a total of 13 tracks – seven on the first EP and six on the second – this is the most Amerie we've gotten at one time in almost a decade. That's the good news. The bad news is that the whole collection features a number of songs that sound far too similar. Nowhere is that more apparent than on 4AM Mulholland.

Borrowing its name from Mulholland Drive, a stretch of road in Southern California, Amerie is in the driver's seat for a late-night excursion.  While the city sleeps, she has a lot on her mind in the middle of the night. The opening track "Curious" finds Amerie questioning a lover about just what they are and wanting to put a definition on it over trap drums and dark synths. It's a relatable head-nodder that sets a sexy, cool mood. Unfortunately, the rest of this set doesn't deviate from that trap drum and synth blueprint to the point where songs start to sound alike albeit with slight variations. Issa vibe, but it's largely the same vibe.

That's not to say that 4AM Mulholland doesn't have its moments. In addition to "Curious," "Not A Love Song" and "A Heart's For The Breaking" are two more songs that dive into the intricacies of love and sound good on their own despite any sonic similarities. On the flip side, Amerie's distinct vocals are heavily Auto-Tuned on "The Wall" and the title song, which takes all the joy out of these tracks.

That joy is restored on After 4AM. The second EP is brighter in tone and has more variation in instrumentation, making it a more pleasing listen from beginning to end. Amerie delivers a slinky bedroom groove on "4thelovers" over a bed of bass and electronic sounds. On "Give It All Up," she encourages an ex-beau to kick his other women to the curb and get back with her. The addition of dramatic piano, strings and percussion signals a song that's more hip-hop soul than trap soul. She continues to switch things up on the remainder of After 4 AM, with this side of the album thankfully featuring more variety.

Where 4AM Mulholland falls flat, After 4AM gives this project the boost that it needs. The first half could have been trimmed down by a good three to four songs and combined with the second half to make this a stronger overall collection. Fans of Amerie's soulful R&B/pop sounds of yesteryear won't find any of that here, but her experiment in trap soul makes for an interesting detour. It's great to get an abundance of new music from Amerie with 4AM Mulholland and After 4AM, but both projects merely leave us wanting that old thing back from the songstress.

Amerie After 4AM [Amazon][iTunes][Google Play]