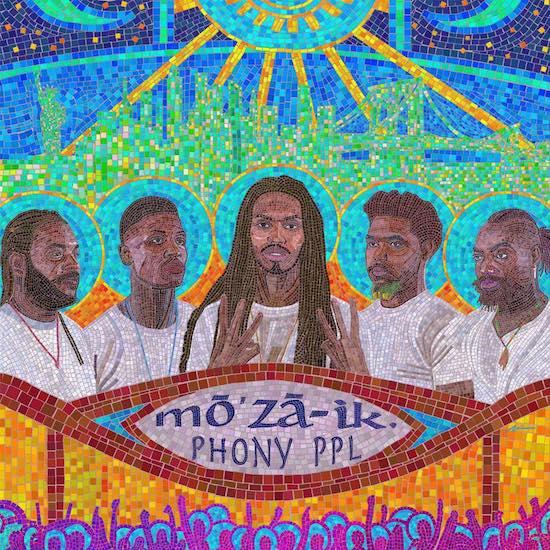 Sometimes love can be good, while at other times, it can be all bad. Still, it is very rarely cut and dry or black and white. The complexities of the colors and emotions that being in love entails remain the focal point for Brooklyn-based outfit Phony Ppl on their just-released sophomore album, mō’zā-ik.

The group's growth as a band is evident from the opening keys of ""Way Too Far," the ode to a crumbling relationship that kicks things off. Hints of jazz, bossa nova, funk, R&B, hip-hop and rock come together under the guidance of rapper/singer Elbee Thrie, guitarist Elijah Rawk, drummer Matt "Maffyuu" Byas, keyboardist Aja Grant and bassist Bari Bass in a way that sounds purely organic.

A true testament to the group's talent is their ability to take the stickiest of situations and turn them into a lush, sunny experience rather than the dirty, muddled mess that it actually is. An illicit affair with an older, married woman is the subject at hand on "Either Way" as Thrie lets it be known he is in it for the long haul regardless of her marital status. Despite the scandalous details found in its lyrics, "Either Way" somehow manages to maintain a cheery disposition, thanks in part of Thrie's youthful optimism.

"Once You Say Hello" and its rich, jam-session vibe belies the fact that it's really a song about the doubt that sometimes arises when trying to figure out if your significant other is "the one" or just a passing phase. Meanwhile, "Something About Your Love" shields a dysfunctional relationship behind a mask of a catchy hook and a kick-ass guitar solo, sounding cheery and sun-drenched despite the fact that the relationship is clearly going up in flames. "Move Her Mind" finds the guys waxing poetic about looking beyond the physical for something deeper. "She can move her ass but can she move her mind? / I will take the risk and we'll find out in time," Thrie sings on the song's chorus over the ethereal vamp.

For the closing cut, Phony Ppl puts aside the sunny vibes to tackle the topic of police brutality. "on everythinG iii Love" tells the story from the viewpoint of a black man who has been shot by the police. As he lies dying on the pavement, he wonders how it came down to this final act. The story doesn't end there, however, as his spirit watches the legal proceedings from the afterlife. "Still I went to all the hearings / As the ghost they couldn't see / Wondering if they'd honor me," he sings about the injustice that has befallen himself and countless other black men before him. It is a somber affair, from start-to-finish, punctuated by solemn strings and the sparseness of the track.

On their sophomore outing, Phony Ppl puts their growth as young men and musicians on full display. In a world where mumble rap and braggadocio reigns supreme, the guys show that its ok to yearn for love and to express that, even if it means putting your hurt on front street. And when the end result sounds this good, it definitely makes the pain worth enduring.