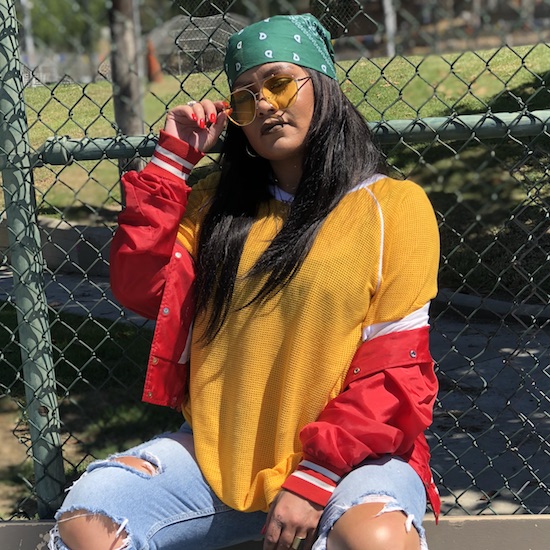 Lea Love's Twitter bio says that she is, "On a different type of mission." We can't think of a better way to describe the artist of Hawaiian, Japanese and Samoan descent whose music is a blend of reggae, R&B, soul and pop. Born and raised in Southern California, the singer/songwriter's work is informed by her diverse background and musical interests. You can hear her signature mix on her new song "No Feels." The single will officially be released on Friday, October 12th, but SoulBounce is bringing you the exclusive world premiere a day early.

"No Feels" is produced and co-written by Juan Rios who's worked with hip-hop heavyweights Rick Ross and The Game. Rios swerves out of that hardcore rap lane to create a breezy, island-inspired sound bed for Lea. There's a heavy thump thanks to bass and percussion accented by organ and rhythm guitar. A well-placed airhorn adds to the reggae vibes.

Meanwhile, Lea Love can be found playing the role of a young woman who finds herself catching feels for someone, but she's trying to reign them in. Throughout the song, she toys with the prospect of taking things to another level with a special friend. She playfully sings that they're, "Less than lovers, more than friends / Where we go, this all depends." She wants out of the friend zone, but she also doesn't want to mess up the good thing they've got. "If you want more than a friend / It would be so hard to pretend that I ain't feeling you tonight," she sings. But by the chorus, she determines that if they do go there, there'll be, "No feels, no feeling you." She talks a good game, but we're not convinced.

Lea Love found inspiration for "No Feels" from her own love life. “I’m one to wear my heart on my sleeve, and my friends always joke that I’m in 'my feels,'" she tells us about channeling her inner Drake. "It’s about how I’m not one to normally catch feelings, but I’m still feeling some type of way about someone," she goes on to say. "It’s about that in-between stage, and I think everyone can relate to it in some way.” We definitely find ourselves relating to that awkward phase that Love sings about in "No Feels," and with cuffing season here it's a position many may find themselves in, too.

Aside from this new single, big tings a gwan for Lea Love. She'll follow up the "No Feels" release with its music video soon. Be sure to keep up with her on her website, Facebook, Twitter and Instagram, and check out more of her tunes on SoundCloud and Spotify.


TAGS:  audio, Juan Rios, Lea Love
Previous: José James & Lalah Hathaway Take Us Back To The ’70s For A ‘Lovely Day’ Next: SoulBounce Exclusive: Geron Is Unbothered By What People Say On ‘TBH’