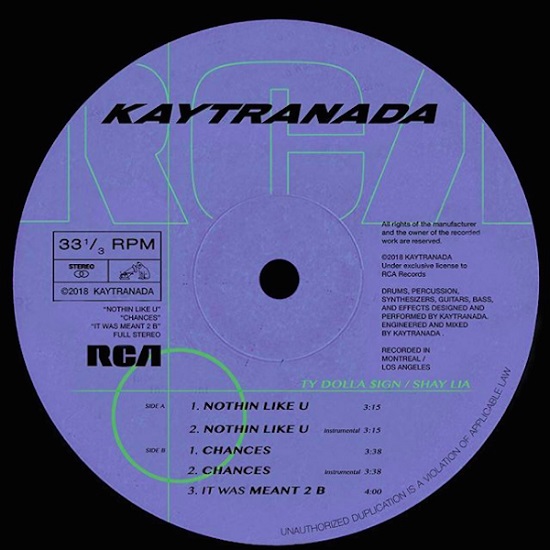 Who doesn't like a Friday? Not only does it mean the weekend is here, but it also means that we've got new music to fill our playlists. This Friday is no exception and it brings with it new heat from none other than our main man Kaytranada. He comes correct with his short and sweet new EP Nothin Like U/Chances, which finds him offering three brand new tracks to set our weekend off right.

First up is "Nothin Like U." Kaytra calls on current feature king Ty Dolla $ign to do the vocal honors over the bouncy R&B production. The beat bumps along happily, with Kaytra's signature elastic bass still lurking in the background although it's a slightly different sound for the producer. Ty, meanwhile, has love and lust on the brain as his raspy voice tells us about a girl who isn't like the others.

More familiar waters are explored on "Chances," which features frequent Kaytranada collaborator Shay Lia. His space-age synths and shuffling groove propel the mid-tempo track. Shay Lia catches the rhythm and takes the opportunity to address those who may doubt an artist's shine. Rather than make it a bitter diss to the "haters," Shay instead offers encouragement to those pursuing their dream and tells them to imagine themselves on stage doing the damn thing.

Last up is instrumental track "It Was Meant 2 B." Kaytra shines solo on this one as he gives us his style unfiltered. This is filled to the brim with synths that layer and build over percolating percussion that makes things feel slightly tropical. Flowing through it all like a river is a liquid bass line that acts as the song's center, directing the rest of the sounds as it snakes through until the track's end.

Saying Kaytranada's new new is good would be an understatement, as he continues to impress and improve every time he comes out of the gate. Go ahead and get you some of Kaytra's musical magic when you take a listen to his latest EP below.