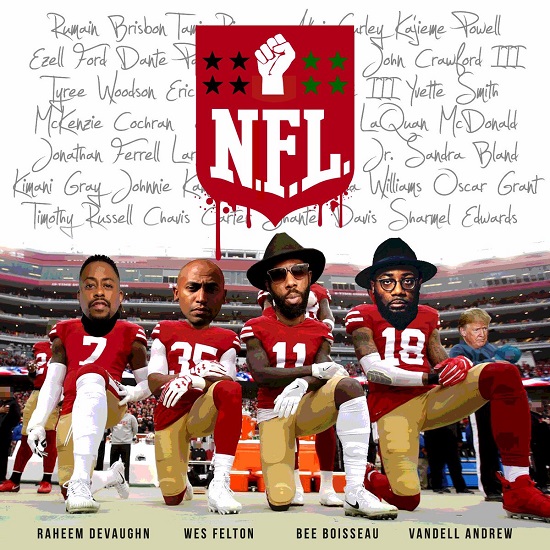 Choosing a lead single can be tricky, especially for an artist preparing to release a debut album. You want something that will grab the ear of your audience, but also introduce them to who you are as an artist. To adopt a sports analogy, this is the time to "go big, or go home." We think musician/producer/vocalist Bee Boisseau definitely chose the former after hearing "NFL," the lead single from his forthcoming debut, Back to Love.

If the name sounds familiar, it could be from his time with The Fuzz Band or his current stint as keyboardist for The CrossRhodes – a gig which led to Raheem DeVaughn signing Bee to his DMG (DeVaughn Multimedia Group) imprint. “It’s really his passion for the culture and for the music,” says Raheem of his decision. Speaking of "for the culture," let's get into this song.

Inspired by the life of activist/athlete Colin Kaepernick, "NFL" can be described as a musical thinkpiece, simultaneously a scathing rebuke, a stirring call for change and an empowering affirmation. Co-written by DeVaughn and Wes Felton with infectious jazz-soul-hop production by Boisseau, the captivating track loosely chronicles Kaepernick's journey from childhood to present-day. Vandell Andrew's emotive saxophone lends additional poignancy to lyrics like, "My skin is black, they just see 'NFL'...They just see a N***a For Life."

DeVaughn explains, "As four conscious artists and musicians of black and brown color that celebrate the hashtag #LiveWoke we have created this anthem in solidarity and honor of our brother, Colin Kaepernick." Boisseau further expounds, saying, “The message is not so much about the National Football League; it’s about the injustices and police brutality against people of color. I don’t want that message to get lost at all.”

Bee joins a lengthy roster of artists like Beyoncé, Rihanna, Diddy, Nas, J. Cole, Bilal and Ahmed Sirour who have publicly shown support to Mr. Kaepernick in various ways. Take a listen to "NFL" below, visit Bee Boisseau's website to learn more about the artist, and stay tuned for his Back to Love debut in 2019.