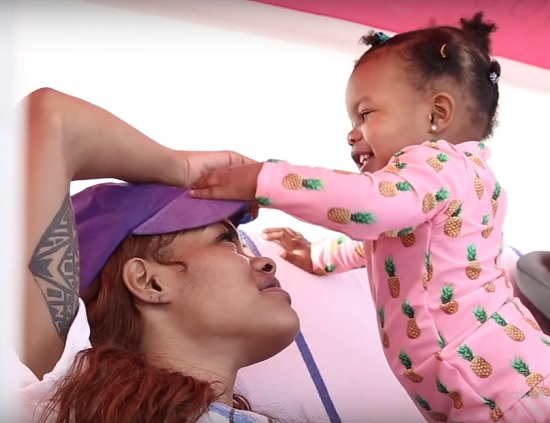 Personally, we think Teyana Taylor is one of the most underrated artists in modern R&B at the moment. She's consistently delivered great songs despite not getting the notice and shine she deserves. Her recent album KTSE is a shining example of just how dope she really is as the short-but-sweet set contains more than a few jams, including "Gonna Love Me" — which recently got a Wu-Tang Clan remix. Now the song also becomes the first official video from the Kanye West-produced project and shows us more of why the singer and actress is so loveable.

"Gonna Love Me" consists of footage of Teyana's love affair with hubby Iman Shumpert, starting with footage of him proposing to her and them getting married. But while Iman is definitely featured heavily, his love isn't the only star of the video. It also focuses on TT's other loves: her beautiful baby girl Junie and her career. We get precious moments of Teyana the mom as she loves up on her precocious baby girl in sweet moments that'll melt your heart. We then also see Teyana hitting the studio, the stage and the road as she records and then promotes KTSE for her many fans. Many have said her stage show is fierce, and it's evident by the way she presents it here with brief clips of her shutting ish down. We also get to see her in vulnerable moments during the process, including tears, rehearsals and frustrations. But there are also triumphs, like getting to meet her idol Janet Jackson. When it's all over, though, it comes back to love and by the looks of it, Teyana's definitely got that in spades.

We don't know when folks will stop sleeping on the talent that Teyana Taylor is bringing to the game. It's their loss though, as the wife, mother and star is bringing a whole lot to love. Check out the video for "Gonna Love Me" below.