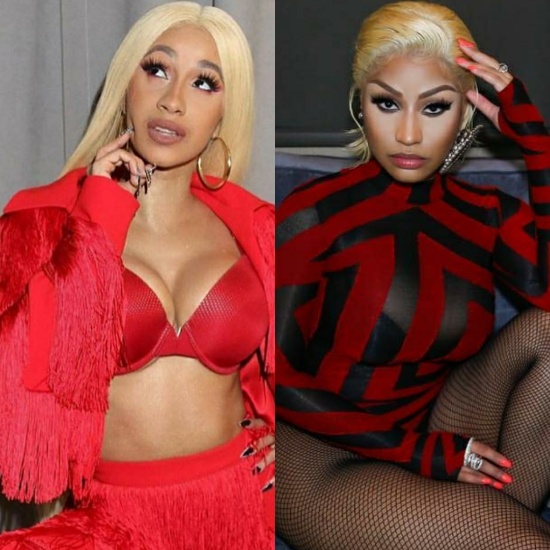 Reigning hip-hop divas Cardi B and Nicki Minaj might've finally come to a truce — but not before coming for each other's throats in a bitter social media battle. It all started when Nicki continued talking slick about the "I Like It" rapper on her Queen Radio show, specifically referencing their infamous Fashion Week altercation and claiming that Nicki's homie Rah Ali basically whooped Cardi's a**. Cardi wasn't gonna let that sit idly, speaking her piece in a series of since-deleted Instagram videos and spawning a bitter and heated back and forth between the ladies and their fanbases. Honestly, we'd name all the claims and accusations, but we'd be here all day. Let's just say a whole lot of shade and whole lot of names (Fashion Nova, Steve Madden, Offset, Bad Bunny, Little Mix and many, many more) got lobbed around like live grenades. Each lady came to battle armed with receipts (Cardi more so than Nicki if we're being honest) but after having her moment, Nicki then switched scripts and said she was done with addressing the "nonsense" in order to "focus on positive things." Cardi's response? She screenshotted the post and then captioned the pick, "Alright then! Let’s keep it positive and keep it pushing!” #IsItReallyOverTho #WeDontThinkSo