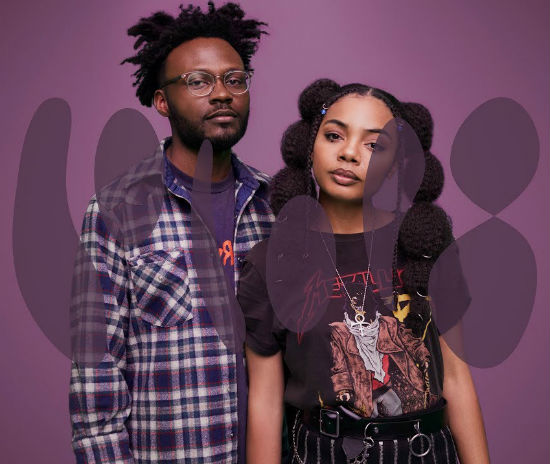 Vocalist/multi-instrumentalist April George and producer/engineer/bassist Matthew Thompson (aka MattVISTA), collectively known as April + VISTA, are the musical equivalent of a cleansing breath. While their third EP You Are Here, released last August, offered every one of our senses the calm we didn’t know we needed, the DMV-bred duo kicked the new year off with an equally tranquil performance on the COLORS platform. Poised in front of an amethyst-hued backdrop with instruments in tow, we are immediately entranced as they perform the track “FOMO.”  As if watching April sing while slaying the keys wasn’t enough to kill us all off slowly, she offers a final coup de grâce and casually turns, picks up her violin and strums a few chords before the visual fades out. If you were asleep or were somehow unconvinced before, this performance is more than enough to make even the most skeptical music snob a true believer.

After meeting through mutual friends, April + VISTA have been creating their own lane with a sound that is both classically soulful and decidedly futuristic. The independent duo capitalized on their musical chemistry, as well as the experience Matt had already gained in the D.C. music scene, and released their debut EP Lanterns in 2015 and Note to Self the following year.  At the same time, April contributed majorly to a slew of GoldLink’s projects by providing vocals on his mixtapes, as well as his debut album At What Cost. She also arranged the strings on his single “Palm Trees,” which was featured on the Season 1 soundtrack of the HBO series Insecure.

Their latest EP You Are Here continues on the wave of serenity that began with their previous projects. While some may be stunned to learn that these talented two are yet unsigned, those of us who understand the pros and cons of the music business suspect that this freedom has allowed them to create the art they want and at their pace. They categorize their sound as “stresswave,” noting its formation from struggle and turmoil. Ironically, though somewhat dark emotion and passion can be felt in each element of every track, the overall result takes every bit of our stress away and we can't wait to hear more.

Watch April + VISTA’s performance of “FOMO” on COLORS below. If you haven’t already, be sure to add each of their EPs to your collection, as each track played back to back feels like a much-needed escape from what has become the musical norm.