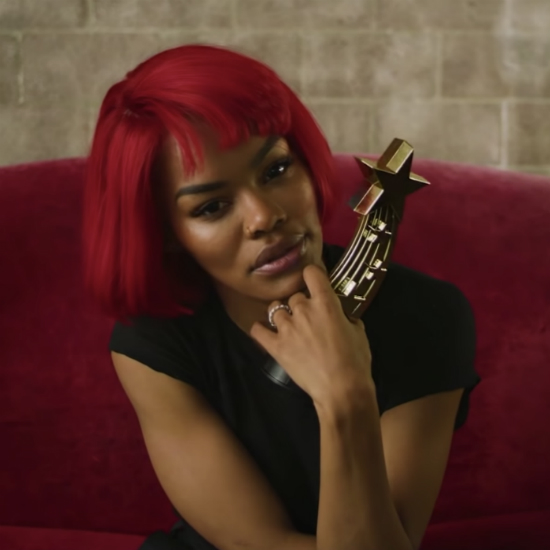 Teyana Taylor has been slaying for a while now so it's no surprise that she's pulling out all the stops in her latest video. The songstress melds the tale of Cinderella and ballroom culture to create stunning visuals that have her voguing all over our screens. The video, directed by Teyana, was shot as a mock documentary and features well-known faces like model Shaun Ross, hairstylist Tokyo Stylez, Big Freedia as The Fairy C**t Motha and actress/director Lena Waithe, who provides plenty of laughs.

In the eight-minute short, Teyana plays a geeky homebody who's forced to cook, clean and sew while her housemates get ready to go to a ballroom dance-off. In one part of the video, Teyana gets teary-eyed, saying "I can work my p***y" and then the beat drops and takes us into the competition. Teyana dons a stunning red negligé sponsored by Fashion Nova with a matching red wig to make her ballroom debut. We then watch her body the competition with her gorgeous technique. Keep watching until the end of the video to catch steamy scenes with her and husbae Iman Shumpert in a boob bounce house.

The infectious "WTP" hails from her latest album K.T.S.E., which Teyana is steadily promoting. Just last month, Teyana shared the music video for the "Gonna Love Me" remix featuring Wu-Tang Clan. We're always excited to see what other creative ventures Teyana has in store for us. If you want to see how Teyana represented the House of Petunia in the ballroom competition, watch her latest video for "WTP" right here.