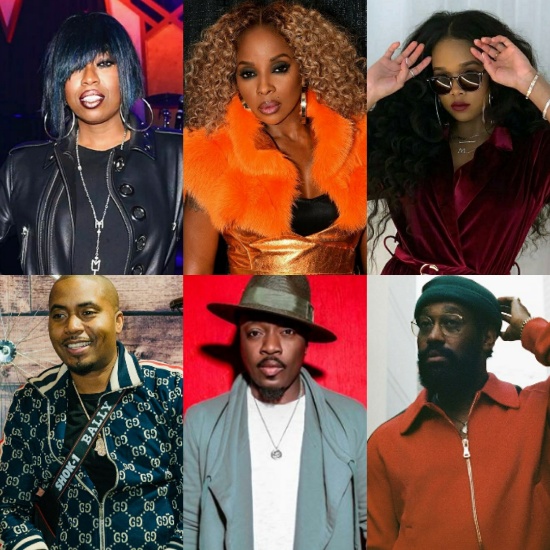 Queue up Tony! Toni! Toné!'s "Anniversary" and play it loud because we have a huge one to celebrate! Break out the champagne, y'all, ESSENCE Festival is celebrating its 25th anniversary this July. The 2019 ESSENCE Festival marks the annual event's silver anniversary, and organizers plan to make it the biggest and best one yet. The city of New Orleans, Louisiana will once again host the fête, which will happen during Independence Day Weekend, July 4th-7th. This year's tagline is "Moving the Culture Forward," and the culture will be on full display everywhere you turn in NOLA during ESSENCE Fest. Daytime activities and experiences across 10 tracks – Beauty, Community, Culture, Eats, Entertainment, Style, Tech, Travel, Wealth and Wellness – will have attendees busy during the ESSENCE Festival Conference & Expo at the Ernest N. Morial Convention Center, but at night things will really be on and poppin' at the Louisiana Superdome.

Cultural and music icons proliferate the lineup scheduled for the nightly concerts. Black Girl Magic will be front and center on the Mainstage with hostess Loni Love, headliners Missy Elliott and Mary J. Blige both making their return and additional performances by H.E.R., Ledisi, MC Lyte, Sheila E., Teyana Taylor and VanJess. Black Boy Joy will be well-represented thanks to DJ D-Nice on the turntables and an extensive list of performers that includes Nas, Anthony Hamilton, Doug E. Fresh, Jermaine Dupri, Morris Day, Musiq Soulchild, Pharrell Williams, Ronnie Bobby Ricky & Mike (RBRM), Teddy Riley and Timbaland. ESSENCE Festival always has epic, one-of-a-kind performances planned for the Mainstage, and this year will be no exception with a special tribute honoring living legend Frankie Beverly planned and MJB and Nas bringing their 25-year-old albums My Life and Illmatic back to life onstage.

And that's not even the tip of the talent iceberg. The Superlounges at the Louisiana Superdome will be taken over by a who's who of acclaimed artists. There will be '90s R&B groups like 702 and Brownstone; sexy soul men El DeBarge and Ginuwine; hip-hop legends Big Daddy Kane, Biz Markie, Ma$e, Rakim and Scarface; SoulBounce faves such as Tweet, AlunaGeorge, Elle Varner, Koryn Hawthorne, Lucky Daye, NAO, Normani and Queen Naija; and the King of R&B in his own mind, Jacquees.

But if you thought that was it, then you thought wrong. Fresh from his first GRAMMY Award win, NOLA's soulful son PJ Morton will record yet another live album on-site at the 2019 ESSENCE Festival. PJ will be joined by JoJo, Luke James, Mia X, Pell and The Hamiltones. The Live Show Killer and Live Album Killer is about to turn that mother out.

As you can clearly see, ESSENCE Festival is celebrating their 25th anniversary in a major way, and if you're a music and entertainment lover, you need to be there to experience all this epicness for yourself. Plan to attend by buying your tickets and making your travel reservations now. 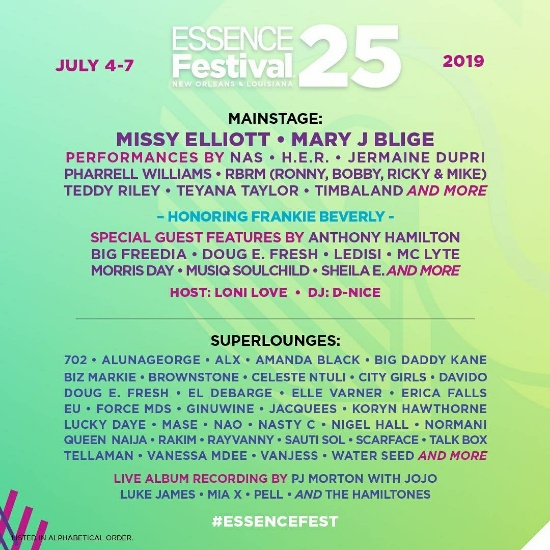