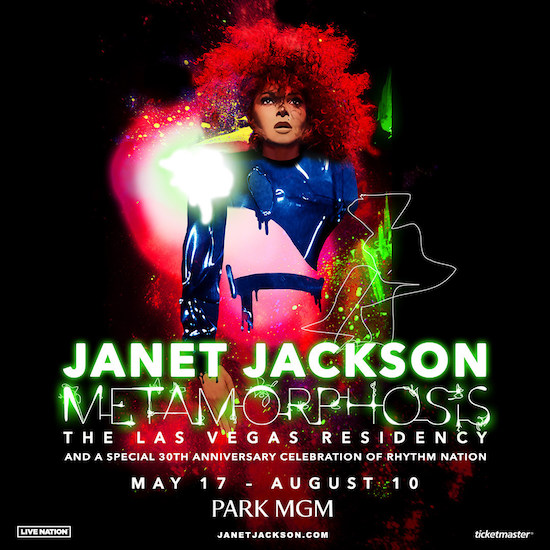 Ask and you shall receive! For years, many fans have suggested that iconic superstar Janet Jackson join the ranks of other artists and do a Las Vegas residency. Janet, instead, opted to do high profile world tours like her recent State Of The World run that has been electrifying audiences. However, after wrapping things up with a couple shows in Japan, it looks like our girl JDJ is on to the next with the announcement of her first-ever Vegas residency, Metamorphosis.

Metamorphosis, which will take place at the Park Theater at Park MGM resort, will aim to showcase Janet's evolution from a young lady with self-esteem issues to the fierce queen that we have all come to know and love. And, of course, the residency will feature all of Janet's hits and even a few deep album cuts to please everyone from the casual concertgoer to the hardcore fan. As well, Janet will also be using the performances to celebrate the 30th anniversary of her groundbreaking fourth studio album Rhythm Nation 1814.

The residency's 15 dates will be spread across the months of May, July and August of this year and will definitely be in high demand. Tickets for the general public go on sale this Saturday, March 2nd at 10 a.m. PST via Ticketmaster. However, if you are a Citi cardmember or a member of Janet's fan club, then you get access to the presale, which starts Wednesday, February 27th at 12 p.m. PST. You can check out the dates for each month below.


TAGS:  janet jackson
Previous: DMV Bouncers: Attend The Watch Party For The Relaunch Of ‘Beyond The Lyrics’ With Cecily Next: J. Cole Packs A Lot Of Symbolism Into The Video For ‘Middle Child’