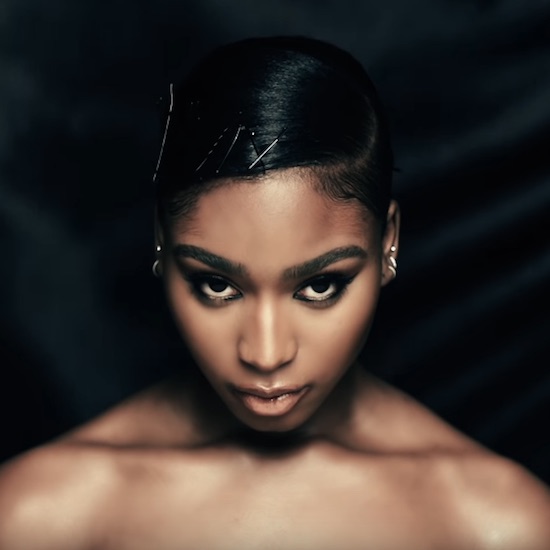 Determined to make a name for herself outside of pop music sensation Fifth Harmony, singer/songwriter/dancer Normani continues to supply fans with a steady stream of impressive singles, shaping the sound of her brand as an individual. She’s collaborated with some of the industry’s hottest artists including Khalid, Calvin Harris, Sam Smith and 6LACK, with whom she crafted the song "Waves." Now the songstress follows up the recently released visual for Smith's "Dancing With A Stranger" with the new music video for "Waves," and it is quite literally out of this world.

Directed by Emil Nava, the gorgeously galactic capture begins with our scantily clad siren waking up on another planet next to a Beats Pill speaker. In the midst of the rocky terrain, she breaks into captivating choreography by herself and with the backing of equally eye-catching brown beauties before joining 6LACK for sensual performance shots.

The alluring visual is the perfect accompaniment to the moody track about a love/hate relationship. We can all speak to those relationships that fluctuate between out of body experiences and being completely out of our minds. Normani and 6LACK brilliantly capture this sentiment in song and now in video.

As she continues to unapologetically flaunt her star power as a solo artist, we’re keeping our eyes on Normani and join the tons of fans, both old and new, who are excited to see all that she has in store. Keep an eye out for her debut solo album, which is slated to drop soon on the RCA imprint Keep It Cool, founded by Tunji Balogun who is also responsible for the success of fellow twenty-something stars Bryson Tiller, SZA and Khalid.