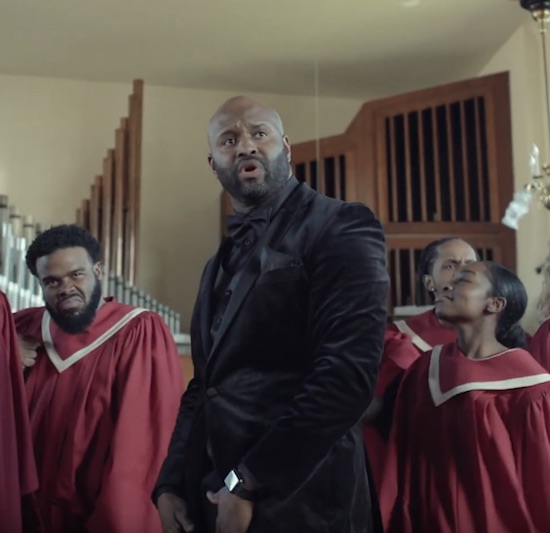 Winston Churchill once said, “If you’re going through hell, keep going.” It is this same energy, though less profane, that empowers Shannon Sanders and the Nashville Urban Choir on their inspirational track “Fight On.” Of the song, Sanders has said at one point he and his colleagues, faced with the challenges of the industry, had to make “…the decision to persist, to fight on,” even when it seemed like their musical dreams were further and further from their grasp. Not only did Sanders find the strength to hold fast, but now he seeks to empower others.

“Fight On” is a little bit country, a little bit rock 'n roll and a lot of gospel and soul. The track starts with Sanders laying out some examples where you need to stay strong, while the choir hums along before repeating the refrain at the chorus. This is set against staccato drumming, keys and bass.

In the video for the clip, Sanders is seen walking towards a dilapidated structure. He enters the deserted building, furnished with only an ornate chair and is seen holding a sword, which he begins to swing around gaining the strength to move forward with life. Sanders is also viewed sitting at a piano on a bridge with the Nashville skyline as his background as he plays. We also get a lively scene of Shannon and the Nashville Urban Choir clapping, stomping, harmonizing and mean mugging on a church stage.

“Fight On” was spotlighted in a CMA Awards performance with Chris Stapleton, Morgane Stapleton, Mavis Staples, Maren Morris and Marty Stuart. How did that happen? Well, according to Sanders, “It’s just people I know.” The GRAMMY-winning singer, songwriter and producer is well-known amongst the musical community in Nash Vegas. In fact, we’re guessing that same community that makes up the Nashville Urban Choir will be front and center on Shannon Sanders’ upcoming project. The album will be producer-driven, where Sanders will provide a platform for other artists. Until we get more details about the collection, let Shannon Sanders and the Nashville Urban Choir provide you with all the inspiration you need to keep going and to "Fight On." Add the song to your collections and playlists right now from your favorite digital music provider.