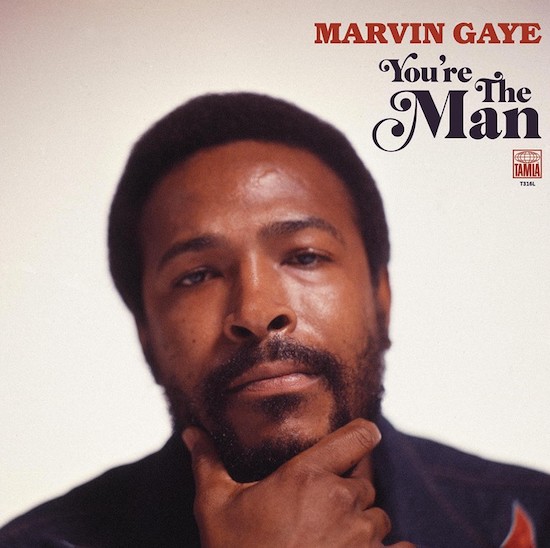 When it was announced that we'd be getting "new" music from the late great Marvin Gaye, many admittedly gave the project a bit of side-eye. After all, history has shown us that sometimes, an album or music remained unreleased for a reason. So imagine this writer's surprise when upon first spin of the newly-released You're The Man, to discover a collection of Marvin still in top form, making it even more confounding that Motown has been sitting on this album for over 45 years.

Originally intended to be released in 1972, the legendary label reportedly shelved the album out of fear that it would be too political, especially following the release of the album's title track. It is hard to believe that the label would have shunned the project following the critical and commercial success of its predecessor, 1971's What's Going On, yet that appears to be the case. Though it would have been easy for a 47-year-old album to sound dated by today's standards, listeners will find that many of the socio-political themes that Gaye was speaking on back then are sadly still relevant today.

In addition to the title track, other songs like “The World Is Rated X” and “Piece Of Clay" find Gaye sharing his observations about the state of the world. "You're The Man" is especially timely considering that Gaye was calling out political candidates at the time who he believed would do little to actually help the people. As we prepare to dive headfirst into the 2020 presidential election, there are likely a lot of people who share in that sentiment about what seems to be an evergrowing pool of political hopefuls. Because the song was recorded shortly after What's Going On, the track itself plays like a natural progression of the funk-influenced sounds that Gaye had begun to explore on songs like "Inner City Blues (Make Me Wanna Holler)."

Though many of the songs that appear on You're The Man have been heard in some capacity over the years since his untimely death, none of the versions that are actually on the album have ever been heard or released before. Meanwhile, producer Salaam Remi provides the only contemporary sounds featured on the album thanks to his updated versions of "My Last Chance," "Symphony" and "I'd Give My Life for You."

Now that the album has finally seen the light of day, Gaye's widow Jan Gaye admits that she doesn't think there's much more unreleased material to come from the late artist. “I happen to have a couple of tracks that no one’s ever heard that he didn’t quite finish, but they’re beautiful,” she revealed recently. “But [Motown A&R man] Harry Weinger is probably one of the best Marvin detectives in the world, because he can pull things out of places that you never knew, and seems to be able to put Marvin’s music in the right hands to be remixed and reinterpreted.”

Though whether or not we have come to the end of the road on Gaye's musical vault remains to be determined, one thing is for certain: he left us a lifetime of musical gems that have kept his legacy alive and well for generations to come.


TAGS:  audio, Jan Gaye, marvin gaye, salaam remi"
Previous: Lion Babe Get Wild In ‘Western World’ & Sweep Us Away With Their ‘Cosmic Wind’ Next: NAO Visits ‘COLORS’ To Pull Us Further Into Her ‘Orbit’