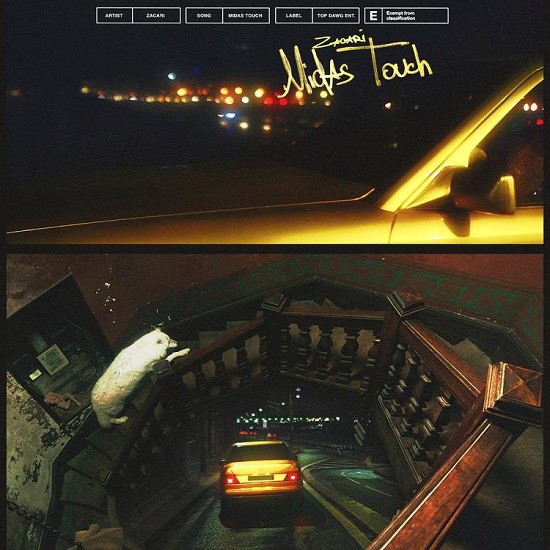 Zacari is still in the process of making a name for himself in the wake of getting his big break through a feature on labelmate Kendrick Lamar's DAMN. in 2017. So far, his lone solo effort has been his debut single "Don't Trip," which was pretty well-received. He hopes to strike gold once again with his latest single "Midas Touch."

Similar to "Don't Trip," "Midas Touch" is a pretty mellow selection. The soundscape is heavy on bass, with the throbbing of electronic notes serving as the backbone of the track. Further fleshing things out are eerie touches of keys and whispery backing vocals that evoke a haunted feel. The vibe might be a bit spooky, but Zacari isn't scared. In fact, he's rather confident as he talk-sings his way through the song. "Everything is golden," he repeats throughout the track. Later, he assures that "everything I do turn to gold with the slightest touch." It's evident that he's about flossing his come up on the song, but he's also about encouraging others to catch their own shine as well. He sprinkles life advice about taking risks for growth and where to put your focus as you aim for success. ("Pay no mind to something that don't pay me back in time," he sings at one point.)

"Midas Touch" definitely has the makings of something pretty great though its drowsy pace can be more than a little offputting, especially to the more traditional music listener. That being said, we'll still be all ears when Zacari readies his upcoming EP. Listen to the singer's latest effort below and let us know your thoughts.