Anderson .Paak & Thundercat Are ‘Haulin’ Off In ‘Peanuts’-Inspired ‘Best Teef In The Game Tour’ Animated Trailer 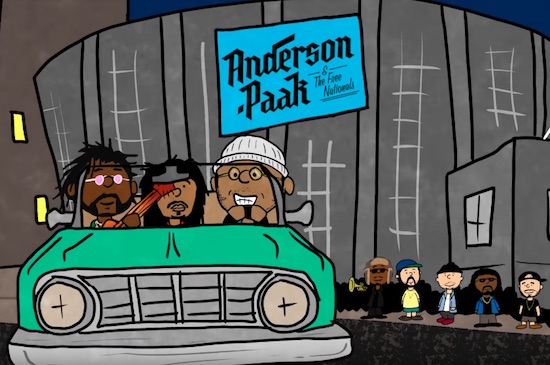 Anderson .Paak and his band The Free Nationals just blazed the stage two weekends in a row at this year's Coachella Valley Music and Arts Festival. These performances and the release of his excellent new album Ventura have fans of the multitalented singer-rapper-musician-produer all the way ready for his upcoming Best Teef In The Game Tour to experience his magic live and direct. The tour kicks off in a few weeks, and .Paak is actually still adding dates to it. He'll be hitting up San Diego on June 26th and spending June 29th at The Forum in Los Angeles. To announce the new dates, Anderson has released a Best Teef In The Game Tour trailer where he also introduces a brand new song with tourmate Thundercat entitled "Haulin."

The always animated Andy gets actually animated in the tour trailer, which finds him and his friends recreated as Peanuts-like characters. It starts with .Paak stage diving and crowd surfing at New York City's Madison Square Garden. Outside of the venue, Thundercat and Earl Sweatshirt await in a green convertible while The Free Nationals are in the background. Anderson hops in the driver's seat and they hit the long road to California. We see that the car's license plate reads "HAULIN" as they soon pull up to The Forum where everyone hops out of the whip and onto the stage.

Anderson and company looking like roasted Peanuts is enough to catch our attention, but it's the song playing in the background that really has us open. "Haulin" is a jazzy number produced by Thundercat and Andy that features Maurice Brown on horns and Kelsey Rhodes on keys while Cat and .Paak hold it down on bass and drums respectively. On the track, he includes a few automobile references as he sings, "Pull out, mash forward / Smelling like a gas leak / Pull out the black bomber / Engine in the back seat, haulin," on the first verse, slightly smoothing out his signature rasp. We don't know if this song was one that didn't make Ventura, if it's something unreleased from yet another new album or something he released for kicks and giggles, but we know that we want more of whatever it is.

Watch the adorable Best Teef In The Game Tour trailer and get into the soulful, jazzy goodness of "Haulin" right here. If you're in San Diego or L.A. and want to see Anderson .Paak at one (or both) of his newly added tour dates, tickets are on American Express VIP pre-sale now and will go on sale to the general public on Friday, April 26th at 10 am PST. Tickets to all tour dates can be purchased from Anderson .Paak's website.


TAGS:  Anderson Paak, Earl Sweatshirt, Kelsey Rhodes, maurice brown", The Free Nationals, thundercat
Previous: Dinah Jane Releases ‘Dinah Jane 1’ EP & Kicks Her Man To The Curb In ‘Heard It All Before’ Next: Jamila Woods Is A Woman On The Prowl In ‘EARTHA’