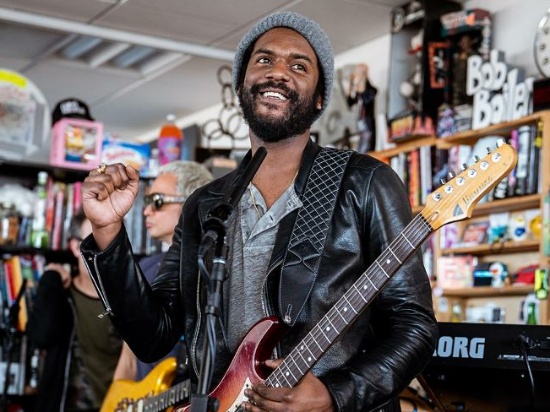 One of the hottest places for artists to play when they come to the Nation's Capital is NPR Music's Tiny Desk Concert series. And we mean "hottest" in the literal sense. Temperatures can get pretty warm in NPR's D.C. headquarters as people pack into the close quarters of the world famous desk. Guitar god Gary Clark Jr. learned this firsthand during his Tiny Desk Concert as he worked up quite a robust sweat during his scintillating performance.

Decked out in a leather jacket and knit cap, it was no wonder that Clark was burning up within seconds of kicking things off with "What About Us." He brought the track from his newly released album This Land to lush life backed by his four-piece band. Of course, Gary held it down on lead guitar and vocals on the funk-rock song. "It's a little bit warmer than I thought it would be, but I feel sexy in this jacket, so I'mma sweat through it," he quipped between songs, making light of his sweaty situation. Clark went on to perform two more tracks from the album, the soulful bop "When I'm Gone" and the bluesy single "Pearl Cadillac," which was punctuated with a rapturous guitar solo.

Gary Clark Jr. ended his Tiny Desk Concert to the sound of thunderous applause from all those gathered. He may have been drenched in sweat, but he was still the coolest cat in the room.