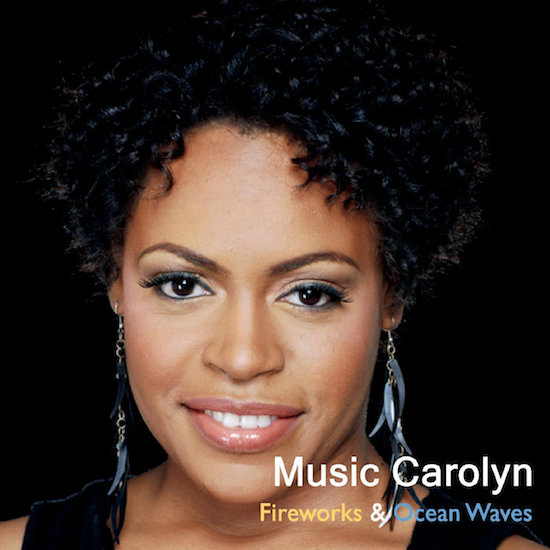 While it’s true that we all have the same 24 hours in a day, some of us seem to be able to squeeze a bit more out of each moment. Take Music Carolyn for instance. In addition to basking in her role as a loving wife and mother of three, the singer-songwriter runs her own music consulting firm, Music 4 Scenes, and works in the Music Clearance department at FOX.  As if that wasn’t enough to make your head spin, she still found time to devote to her first love and recently released her debut album, Fireworks and Ocean Waves.  She describes the project perfectly as a “positive love fest for couples,” as its relaxed jazzy vibe provides a sweet soundtrack for all those who might be feeling a little frisky during the spring season. She says, “A few babies could be made, a few marriages saved, and a few new 'situations' could go a little further if you listen to my album.”

The 11-track celebration of romance begins with the project’s lead single “Satisfied,” which was produced by Ty Macklin, who has worked with Sy Smith, Erykah Badu, India.Arie and N’Dambi. The smooth groove sets the grown and sexy tone of the album and explores the freedom found in the security of new love. We continue along this wave with “Walls Fall,” produced by GRAMMY-nominee Cori “Fader” Jacobs before kicking up the tempo a bit with the sensual “Rising to the Surface.” The Latin-tinged “Just So You Know” keeps things festive and was produced by Carolyn’s husband Adriohn Richardson, who also worked his magic on two other tracks including the wedding season-worthy ballad “I C Me and U.”

The album also features three standout songs from the couple’s album Life and Times of Love from when they performed as the hip-hop soul duo Taniq nearly 10 years ago. The William Washington-produced “Love Funk” closes out the project and leaves listeners with a reminder to never give up on love despite any challenges one might face. Whether you are grateful for the love in your life or praying for one to call your own, this album will have you reveling in optimism and ready to savor all the feels of love in any form.

Give Music Carolyn’s Fireworks and Ocean Waves a spin below and be sure to add the album to your collection from your favorite digital platform. Follow her on Twitter, Instagram and Facebook, and keep an eye out for music videos and live shows in New York City, Houston and Chicago in support of the new album.