SoulBounce Exclusive: Sugaray Rayford Introduces You To ‘The Revelator’ 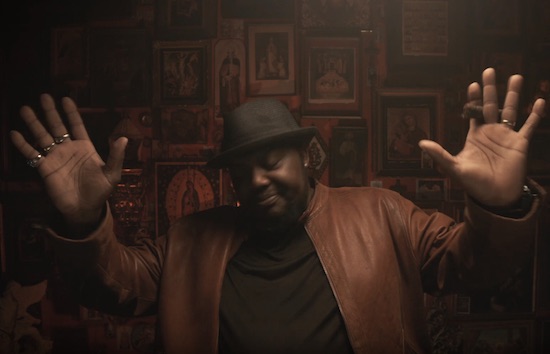 Sugaray Rayford brings it to you straight, no chaser on his new album Somebody Save Me. Nowhere is that better heard than on the project's opening track, "The Revelator." A revelator is defined as "one that reveals," and Rayford breaks it down about who he is and who he is not on the funky number.

Over a thick bass line, organ and drums, Sugaray beckons, "I'm a revelator, come with me," to begin the song. "I'm a freak of nature, I ain't no honey bee / I'm an unknown creature, the likes you've never seen," he goes on to sing on the first verse. He defines who he is throughout the track, proclaiming on the second verse, "I'm like a caped crusader, sweeping up the streets / I'm your favorite flavor, savory and sweet / You're looking for a savior, to believe / Think you've found the traitor, but you don't see me." In case there is any confusion after all that, he ends the song repeating the lyric, "No, I ain't your preacher," for anyone still in the dark and needing to see the light.

Sugaray brings "The Revelator" to life in the song's music video produced by Suzan Jones and directed by Kelton Jones. We see a vintage television set tuned in to Rayford who is bobbing his head to the track's groove on-screen. Watching the TV in her living room is a middle-aged Caucasian woman who is enthralled with what she's seeing as Sugaray goes on to perform the song and seemingly sing directly to her. She watches intently and goes through a range of emotions before drowning her sorrows in liquor. After hitting the sauce heavy, the woman later envisions Sugaray sitting on the couch next to her to end the clip with a funny twist.

According to Sugaray, with "The Revelator" he is, "here to expose the hypocritical rhetoric that’s being pushed on to us by the establishment about how to live, think and interact with life and each other." That's an ambitious goal, but this Texas-born ex-Marine is determined to make his mark through his music.

Watch Sugaray Rayford's "The Revelator" music video in this exclusive SoulBounce world premiere. For more blues, funk and soul where this came from, be sure to add his album Somebody Save Me to your collection.


TAGS:  Kelton Jones, Sugaray Rayford, Suzan Jones
Previous: Sasha Keable Demands Attention On ‘Treat Me Like I’m All Yours’ Next: Elle Varner Is Looking For A Different ‘Kinda Love’