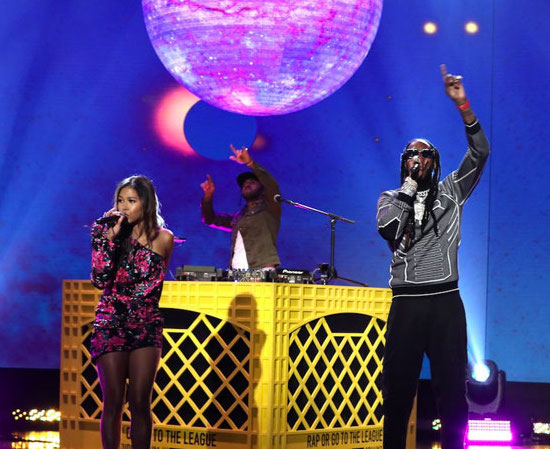 Rapper 2 Chainz stopped by The Ellen DeGeneres Show where he was scheduled to hit the stage to perform his latest single, "Rule the World." While on the song he is joined by Ariana Grande, he was instead joined onstage by singer Amerie who stepped in to handle the vocals.

Though the performance marked the singer's first televised performance in a minute, Amerie unsurprisingly handled things like a pro. And for good reason too; "Rule the World" samples her classic debut single, "Why Don't We Fall in Love." The leggy beauty bounced alongside the Atlanta rapper as he smoothly ran through the ode to the love of his life. The audience was clearing feeling it as the camera cut to show them standing up and grooving with their hands in the air.

"Rule the World" is the latest single from 2 Chainz' latest album, Rap or Go to the League, which dropped in March. Meanwhile, though the performance was Amerie's first in a while, the talented singer and new mom has been slowly inching her way back into the scene, most recently surprising fans last October with her double release, 4AM Mulholland and After 4AM. Though Ariana recently postponing her tour due to illness will likely keep her from joining 2 Chainz for a live performance any time soon, we certainly wouldn't be mad if Amerie stepped in again.