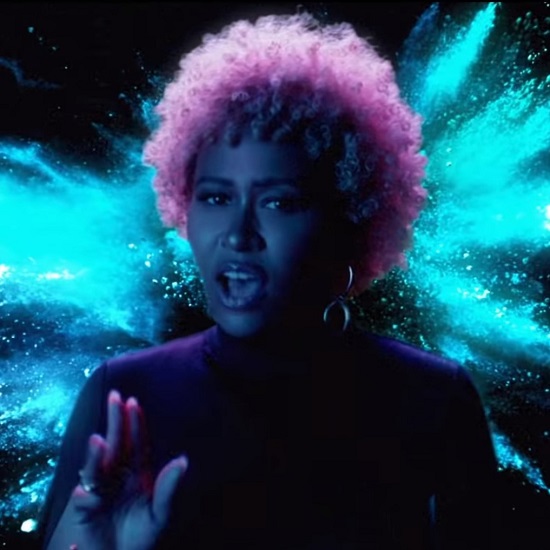 Emeli Sandé has always been a radiant force whose musical energy spreads joy to listeners all over the world. As she readies the June release of her third album REAL LIFE, we're already eager to hear more of her stirring vocals and powerful lyrics. Back in March, she made a bold statement with the lead single "Sparrow." The drama continues, quite literally, in fact, with the visuals for her latest release "Extraordinary Being."

The track has cinematic ties to the upcoming film X-Men: Dark Phoenix. Ms. Sandé reveals, “Fox approached me about collaborating with them on a song for X-Men: Dark Phoenix....I already had ‘Extraordinary Being’ in the works, and when I saw the film was blown away at how the lyrics of the song matched the journey of the lead character [Jean Grey]. It really felt like the perfect fit!” Directed by Sarah McColgan, the video captivates by showing dramatic scenes of the movie, featuring our favorite mutants – Jean Grey (Sophie Turner), Cyclops (Tye Sheridan), Storm (Alexandra Shipp), Nightcrawler (Kodi Smit-McPhee), Mystique (Jennifer Lawrence), Beast (Nicholas Hoult), Quicksilver (Evan Peters), Magneto (Michael Fassbender), and of course, Professor X (James McAvoy) – interspersed with stunning shots of Emeli singing against dazzling backdrops.

As for the song itself, listeners are treated to a slow-building dance track steeped in disco, pop and soul. The singer explains the lyrical theme, saying it's “about exposing the lie that we are ordinary. We are extraordinary. It is about reminding people of their innate greatness which exists in everyone. The extraordinary is not just for some people, it is for all of us. I hope the lyrics will help those lacking in confidence to be reminded of their super powers.”

Embrace your greatness and check out "Extraordinary Being" below. Afterwards, check out the trailer for X-Men: Dark Phoenix, and listen out for the song when the movie premieres on June 7th. Better yet, go ahead and pre-order REAL LIFE to receive an instant download of the track today.