Mary J. Blige & Nas Work It For The Camera In The ‘Thriving’ Lyric Video 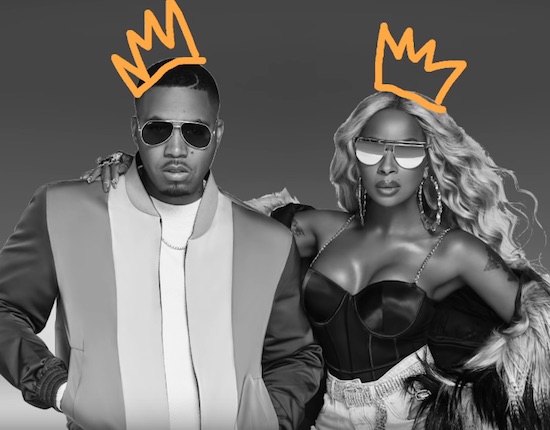 Mary J. Blige and Nas are "Thriving" together on their new song and in the track's lyric video, which they both actually appear in. The visual splits its time between footage of Mary and Nas at a photo shoot and black-and-white photos from said shoot that serve as the key art for "Thriving" and their upcoming co-headlining tour, The Royalty Tour.

In case you haven't learned all the words to "Thriving" yet, the lyrics splash across the screen in mostly bold white print with pops of color from animated crowns, dollar signs, a trophy and other symbols while we watch Mary and Nas strike a pose and flex for the camera. We see them dressed in the urban chic outfits they rock on the single cover art, and they also serve up a fierce eveningwear look with Nas suited up in a tuxedo and MJB giving us fever in a white gown with plunging neckline and a slit to the waist.

The "Thriving" lyric video was co-directed and produced by Robert Ector who is Blige's creative director and photographer. Ector's camera loves MJB, and he has her looking absolutely fab in this clip. If this is what they put together for just the lyric video, then we can't wait to see the official music video and the rest of the photos from this shoot.