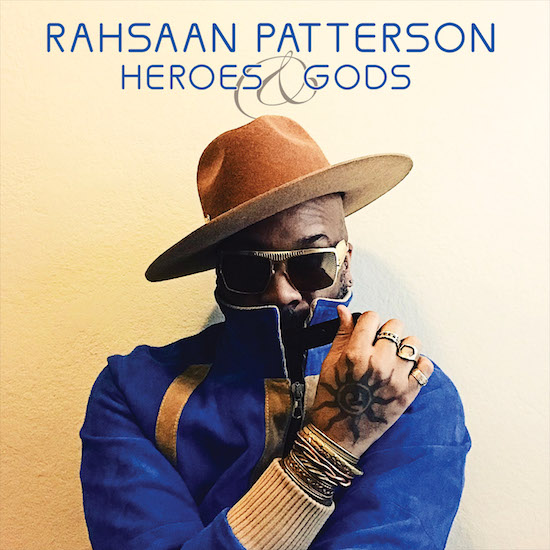 It's been nearly eight long years since Rahsaan Patterson blessed us with his last album. In that time, a lot in the world has changed — some for the better and some for the (much) worse. He might have made us wait for quite some time but Rahsaan's latest Heroes & Gods proves the age old adage that good things come to those who wait.

The skilled singer-songwriter delivers from beginning to end on the album, starting with opener "Catch Me When I Fall." The song is a loving throwback to the early days of Rahsaan's career, complete with slick harmonies and romantic lyrics that make you want to fall in love. After luring you in with that, though, he almost immediately switches things up and keeps listeners on their toes with songs like "Wonderful Star," "Silly Love Fool" and "Rock And Roll" giving us different and unexpected sides of Rahsaan than we've come to know throughout his decades-long career. There's threads of '70s and '80s soul influences heard throughout the album that will remind you of some of his idols — including Prince, Al Green and a few others. However, moments like his impressive cover of Luther Vandross' classic "Don't You Know That" reveal that while he's interested in honoring his influences, he has no desire to imitate them.

One of the best things about Heroes & Gods is the musician's willingness to experiment. While he's given us glimpses of his interest in house and dance music before, he uses this album to explore his affinity for the style in full, resulting in standout tracks like "Soldier" and the aforementioned "Silly Love Fool" that give the album a pulse that's missing from a lot of the more mainstream offerings. He also incorporates elements of rock (the searingly sensual "Wide Awake") and '80s pop balladry (the melancholy melody of "Oxford Blues") along with whatever else he decides to include as part of his musical aesthetic.

The beating heart of the whole project, though, is the title track "Heroes And Gods." The track acts as a refresher course in case, for some odd reason, you weren't paying attention before. Soul, dance and electronic elements coalesce on the swirling, soaring groove as he not only honors those that came before him but also the divine within us all on the chorus, singing, "If you're looking for us / Search in the stars / Know who we are / Heroes and gods / Beautiful ones made of the sun / That's who we are, heroes and gods."

Sure, eight years is a long time when you're anxious to hear the latest from a musical favorite. But Rahsaan's masterful turn here proves some of the best musical gifts we receive come when the artist is given time to experience life and then offer up their art for the world to hear.