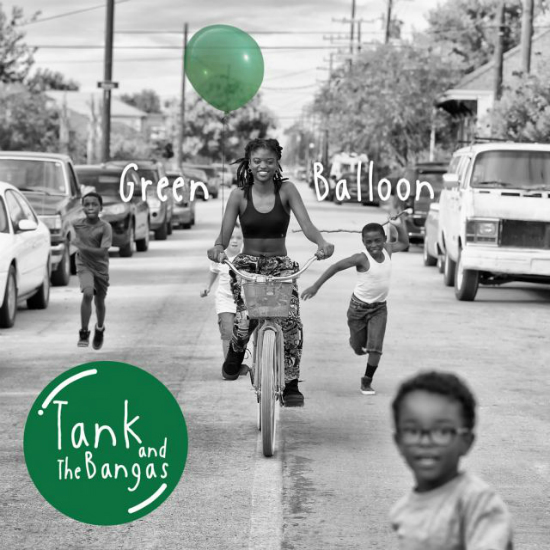 There’s the New Orleans Jazz we know, and then there’s the New Orleans Jazz that we won’t ever really know, which is by design. Jazz, which could be described as the art of musical improvisation, is always changing and growing. While we love the works of stalwarts like Louis Armstrong, Jelly Roll Morton and others, that foundation has proven to be rich soil for other musicians to grow. Artists like DAWN, PJ Morton and Trombone Shorty have taken that foundation and expanded it based on the influences of other genres. That might be the best way to describe Tank And The Bangas both yesterday and today.

The group combines jazz, blues, funk, soul, R&B, hip-hop, spoken word and a few other kitchen sinks into a harmonic gumbo. And, like the music of their hometown, the group has grown, too. The Bounce-Worthy group went from being local darlings to NPR’s Tiny Desk fame and beyond. That growth can be heard loud and clear on their new album, Green Balloon.

Lead singer and group mastermind Tarriona “Tank” Ball has said that Green Balloon makes her feel "like the girl I was in middle school. Every song resonates to each person I was in my life up until now. I've been green with envy, green with naïveté; I've bought green and gotten High, I've felt like a balloon...full of myself and floating away and also held down. And like all green things...I've also changed, and I've grown. Green Balloon is every version of myself that I've met so far." It’s been six years since their debut album Thinktank, and the group has changed both musically and personally.

The album opens with the interlude “Colors” where against soft piano playing, Tank recites different colors, setting the mood for the album. This segues effortlessly to the first track, the previously released “Spaceships.” The lively, uptempo song sets the tone for the first few songs on the album, as Tank gushes in her newfound wealth and celebrity, with green representing money. The theme continues on the Zaytoven-produced “Dope Girl Magic,” the most unexpected track on the album. Here, Tank goes full hip-hop, flowing seamlessly over the trap beat, switching between different flows and vocal inflections. It’s a huge departure from anything we’ve heard from the group and could take a few listens to appreciate it. But, in the scheme of an album about growth, it only makes sense to have a hip-hop track about balling out. Here’s hoping they can get Rick Ross on the remix.

The album returns to the Bangas' vibe that we're used to on the next track, the first official single, “Ants.” Over a frenetic, jazzy funk groove, Tank takes a step back from her baller lifestyle to contemplate her past, the little things in life and how things have changed. On “Forgetfulness,” the group is trying to stay grounded and focused as things continue to change. There are lyrics pregnant with meaning like, “Rent due, past due, new shoes,” that are playful yet insightful.

The “Get Up” interlude is a piano-led instrumental with some fancy work from the talented Robert Glasper, which bleeds into “Too High,” a prelude where Tank describes her feelings of joy and guilt smoking weed. The ballad “I Don’t Get High” features wailing harmonies, finger snaps and a mid-tempo thump, where Tank shows off her pipes as she worries about getting “too big for the stars” or not achieving her potential. The most pure R&B track on the album, the song is hopeful yet melancholy.

“Happy Town” starts off with the same downbeat as the previous track but transforms into trap beat, before flowing into a Disney-ish sound of stark keys and playful singing. Fellow New Orleans native Pell comes through on the trap beat drop, adding some heat to the festivities as he raps, “I’m riding with Tank so you know there’s no limits.” Next is the second single, “Nice Things.” Here, Tank flexes her vocal skills, blurring the line between singer, poet and rapper as she talks about enjoying the finer things in life. This might be where the group most successfully merges Tanks whimsical vocal antics with a more commercial vibe. The early 2018 single “Smoke.Netflix.Chill” also does a pretty good job, too, though it leans more on the commercial side than any of the other songs on the album. The mid-tempo groove of keys, subtle horns and synths tells the story of a casual hookup. Unfortunately, the situationship isn’t as sticky as the weed they’re smoking.

On “Floating” interlude, Tank harmonizes over stark piano keys and provides some spoken word about losing herself. This leads into the track “Mr. Lion,” a song about being strong but losing yourself in putting up that front, missing out on many things, and that true courage is about taking a chance on things, such as love.

“In London” is another interlude featuring Glasper. His piano plays as Tank journals about her new experiences, “All we do is lay. We lay all day.” Her guilt continues to tug at her. She feels so many negative feelings, from guilt to shame to sloth. But most of all, she feels unloved. She’s in another country but doesn’t feel appreciative of it or her success. She feels numb, which only makes her feel worse. This sets up the vibe of “Lazy Daze,” which finally gives us a full track with Glasper. Here, she bemoans the purgatory of trying to achieve your dreams, singing, “There’s such a thin line between finding yourself and being in between dreams / There’s a little bit of faith I know, little bitty seed of mustard grow in my soul.” Glasper provides a jazzy backdrop for Tank’s lyrics and melisma to shine.

Finally, the album ends on “Colors Change.” Tank ponders, “Was I too much or too tough for thinking that everything I do is simply not enough?” over lush keys and flutes. Just when you think it’s another melancholy track, though, things switch up. The production changes to a simple acoustic guitar lick, a soft backdrop for Tank to deliver some spoken word to a jilted lover. She’s gone from being a naïve person worried about the thoughts, feelings and opinions of others. Now, she’s a woman, embracing the green color, full-grown and vibrant with life.

Green Balloon tackles multiples themes through the power of melody, and it does so seamlessly. Songs ebb and flow naturally, which is a hard task considering the number of genres present on some songs by themselves, not to mention on the album as a whole.

Of course, there are some growing pains on the album. The group is more polished but less whimsical than on their debut, Thinktank. While remnants of past songs like “Rollercoasters” can be seen in the metaphors of current songs, you’re not going to get anything like “Boxes and Squares.” For some, this might be disappointing. Some may say that songs like “Spaceships” or “Smoke.Netflix.Chill” are far too commercial. Finally, their album is at a detriment, as the songs on wax can’t live up to their live shows. Their debut album gave you some of that flavor with the randomness and quirkiness of the project. The group honed their craft on stage, and a bit of magic is lost in recorded translation. But what you can’t say is that Tank And The Bangas didn’t put together a creative, cohesive album. An album that takes you on a journey, making a few stops that might touch your heart or speak to your soul.