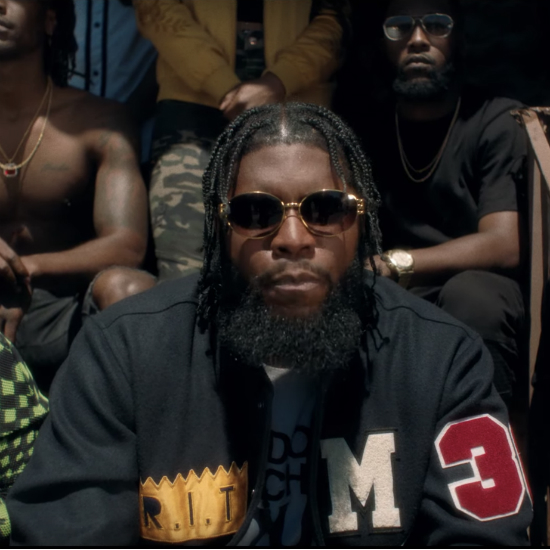 Big K.R.I.T. is coming full circle with his career with the release of his fourth studio album, K.R.I.T. IZ HERE. Announced via Twitter, the artist shared: “It’s been 9 years since I released 'K.R.I.T. WUZ Here' and I got one thing to say K.R.I.T. IZ HERE!” letting lovers and haters alike know that he’s not going anywhere. With the announcement of his new album, he also shared the lead single “K.R.I.T. HERE.” On the bombastic track, Southern Rap’s favorite son continues the messages of growth, empowerment and community from his previous single “Energy.”

“Take a lifetime to spend it / Hit that bank just to visit / Raise a hand if you with it / Drop the top on the roads, had to holy the ghost / Bottles servin' for family, I'm proposin' a toast / Made it out the hood like ‘yeah’,” K.R.I.T. loudly, proudly and deservedly talks his ish about going from nothing to something over DJ Camper’s uptempo production of jungle drums, horns, synths and soulful, distorted vocals. While the track could be confused for your usual braggadocios rap song, Krizzle brings more to the table, as the track is a more of a celebration of where he’s been and where he’s going.

The hot-off-the-presses track also dropped with a music video. Directed by Child, the clip showcases K.R.I.T.’s journey to greatness. The visual starts in a faraway time known as 'THEN" with him back home in 2009, showcasing the faces of the people around the way, knuckin’ and buckin’ to his music. The clip then breaks from that scene to deliver a special message about how record labels view black artists, likening record executives evaluating black rappers to a modern-day slave trade. When the executives get to K.R.I.T., they describe him as an “underrated underground rapper,” going for the bargain basement price of $90. It's a jarring and thought-provoking scene. Fast forwarding to 2019 and "NOW," the scene switches to a spiritual celebration where women dressed in African garb and musicians guide K.R.I.T. to the church to share his testimony of how he made it over.

K.R.I.T. IZ HERE follows up the double album, 4eva Is Mighty Long Time, as well as his EP project, TDT. The new album is set for release on July 12th, and you can get an earful and eyeful of the first single right here.