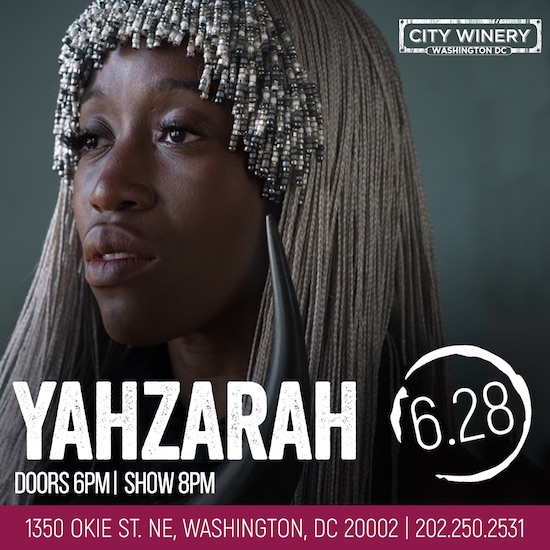 She's shared stages with legends Erykah Badu and Lenny Kravitz, recorded with The Foreign Exchange and had her work featured in the Spike Lee joint She's Gotta Have It on Netflix. In case you haven't figured it out by now, she is YahZarah, one of the most exciting indie soul singers and performers in the business right now. She's got a lot going on – including a new album in the works – but she's making time to come home to Washington, D.C. later this week for a concert at City Winery DC on Friday, June 28th.

If you've seen YahZarah perform live before, then you already know that she turns it out onstage. We suspect that at Friday's show at City Winery will be more of the same with some extra sauce since her birthday was on Monday of this week. Make plans to celebrate and raise a toast to YahZarah at this concert. Tickets are on sale now at the City Winery DC box office and online. Good seats are still available, but not for long so be sure to scoop them up ASAP. Something else to do ASAP is to enter to win a pair of tickets that we're giving away to this show courtesy of City Winery DC on the next page. Good luck and get ready for a great show!


TAGS:  City Winery DC, yahzarah
Previous: JAMESDAVIS Gives Us ‘Something To Talk About’ Next: The Shindellas Want A Love That Gives Them ‘Chills’