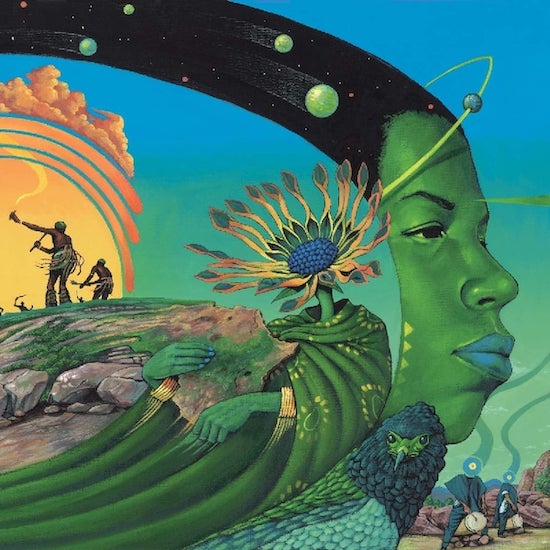 In case you were wondering if it's possible for an artist to seamlessly weave together the funk sounds of the '70s with the boom-bap of hip-hop's early days with a heaping dash of jazz, Georgia Anne Muldrow is here to let you know that it is totally possible and makes it look easy in the process. Muldrow returns with a new album, VWETO II, that delivers a funky instrumental journey through the mind of the multi-talented artist.

On the new album, Muldrow blesses listeners with an hour-long ride that's a whole entire mood. There's the energizing vibe of tracks like "Yoyo Ma Funk" and "Bronx Skates," while the slinkiness of "Nate Dogg's Eulogy" and "When the Fonky Radiates" set the tone for a chill time to be had by all. Meanwhile, she creates a more haunting experience with songs such as "Emo Blues" and "Mary Lou's Motherboard" before flipping it up transporting listeners to outer space with the astral dreaminess of "Wu Punk" and "Big Mama Africa Jam." Though it can be easy for an instrumental album to fall victim to sounding like an incomplete project, Muldrow's moody compositions paint a portrait where words aren't even necessary.

VWETO II is the second album to come from the talented Cali-native in less than a year, coming on the heels of 2018's Overload. The album borrows its name from the Swahili word for "gravity," an idea that is often echoed throughout its 16 tracks. "VWETO II is an astral funk laden mindscape. best used for long term discussions, late night car ciphers, deep contemplation, clearing the air after an argument or starting a brand new day. repeat as needed. Uhuru,” she explained via press release.

Muldrow is clearly in the midst of musical fertility as she has already announced plans for another album due out later this year alongside her hubby and musical partner, Dudley Perkins. Set to drop August 9th is Black Love & War, which would make this the fourth studio album the two have recorded together. As we await the return of the duo known as G&D, we can enjoy the sounds Muldrow brings forth in her latest project below.


TAGS:  audio, dudley perkins, g&d, georgia anne muldrow
Previous: Eric Roberson Steps Out In Style For ‘Leave It In’ Next: Serayah Gives Her ‘Love’ To The Fakers & Haters