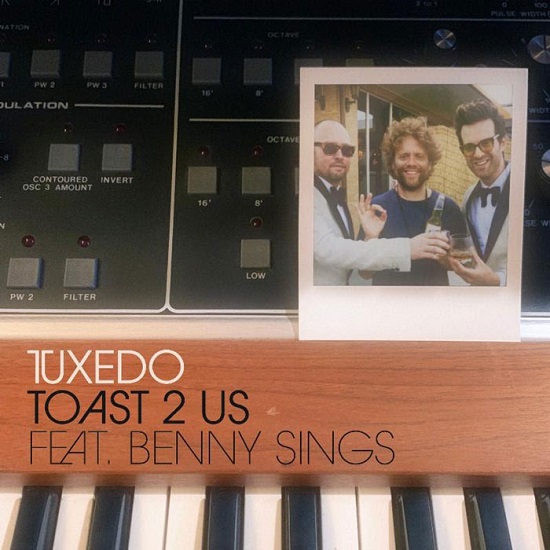 With the gaggle of new projects scheduled to drop over the next few months, we already knew this was going to be a soulful summer. But now our boys Mayer Hawthorne and Jake One have confirmed that the upcoming season will be good and funky as well. Joining forces as Tuxedo, the creative partners are planning to drop their junior album, appropriately titled Tuxedo III, on July 19th.

In hindsight, we should've known they were up to something big when they dropped their celebratory funk anthem "The Tuxedo Way" and announced a 21-city tour. On the other hand, we love a good surprise, so this is a win any way you look at it — especially since the announcement comes with the release of another new single called "Toast 2 Us."

Ironically, the new song has been 13 years in the making. As Jake recently explained to Billboard, "It was a beat I had I thought was dope. I made it as a rap track, but I didn't know who the hell was going to rap on it back then, which is part of why it just sat. When we started putting together tracks for this album I ran across it and sent it to (Hawthorne) and he went crazy." Upon first listen, we totally understand and share their excitement.

A groovy tune that's equal parts chillwave and slow jam, "Toast 2 Us" features the yacht soul stylings of Dutch musician Benny Sings. Over a smoothed out soundbed built upon synth and 808s, the trio has us body-rolling and ready to put some bubbly on ice as they sing about romance and relationships. Hawthorne was quite pleased with the end result, gushing, "He just smashed it...The thing he sent us back, I was like, 'Omigod, this couldn't be any better!'" We have to agree. Benny blends in so perfectly with their sound that we're thinking they might want to make him an unofficial third member of the group.

Take a listen to "Toast 2 Us" below, grab your tickets for the Tuxedo tour and get ready to #FuxWithTheTux once again when Tuxedo III drops next month.


TAGS:  audio, Benny Sings, jake one, mayer hawthorne, Tuxedo
Previous: GoldLink Shows The Diversity Of His Range With ‘Diaspora’ Next: SoulBounce Exclusive: The Goods Are Ready For Good Times With ‘Let’s Roll’