Beyoncé Makes Her ‘Spirit’ Even ‘Bigger’ 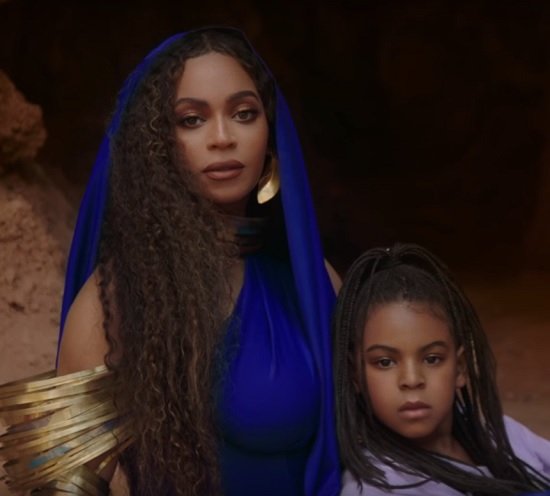 Just before The Lion King arrived in theaters (and won this weekend with a nearly $200 million box office haul in the US), Beyoncé released the video for original contribution to the film's soundtrack, "Spirit." The gorgeous clip not only evoked the spirit (no pun intended) of the film, it also showcased breathtaking visuals, dance routines and the budding beauty that is her daughter Blue Ivy Carter. Now that the film's Bey-curated companion album The Lion King: The Gift has arrived, she's extended the video to include her song "Bigger" and give us even more gorgeousness than before.

In this new extended cut, after "Spirit" ends, "Bigger" begins. Not much changes in the look of the piece as these two clips were obviously filmed together. What does change, though, is that we're almost immediately given an image of Beyoncé posed with her seven-year-old as the song plays. Seeing the two together helps the viewer to realize that the song is really a loving message from Bey to her firstborn, letting her know that she's part of something that is indeed bigger than us all. Beyoncé gets an ample showcase here as well, with the singer appearing in almost every shot as she relays her message of passing on a strong legacy for her young one to carry when she's gone.

"Spirit" might be Oscar-bait, but we have to hand it to Beyoncé for giving us a song that is not just important to her little ones but gives hope and inspiration for the next generation of beautiful black children who need messages of love and hope to guide them along the way. Check out the extended video for "Spirit" and "Bigger" right here.


TAGS:  beyoncé, Blue Ivy Carter
Previous: DMV Bouncers: Vine Of The Rhyme Invites You To Enjoy ‘A Glass Of Purple Rain’ & Commemorate 35 Years Of Prince’s Classic Work Next: Chanté Moore Is In The Throes Of A ‘Fresh Love’