Lizzo & Missy Elliott Move It To The ‘Tempo’ 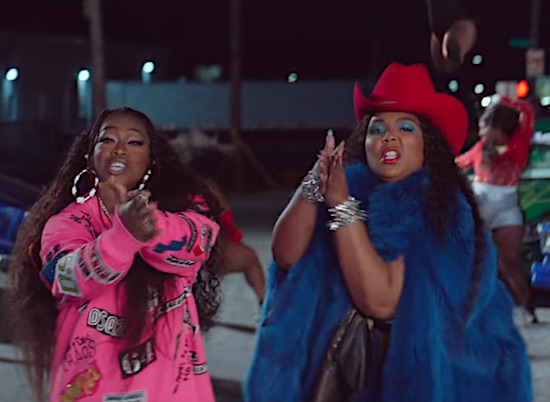 “I been waitin’ for this one!” Missy Elliott proclaims at the beginning of Lizzo’s “Tempo.” Ever since the professional singer, rapper, flautist and twerk artist dropped the joint before the release of her current album Cuz I Love You, we’ve been eagerly awaiting a video for the track. Thankfully, Lizzo doesn’t disappoint, giving us a visual that captures the crazy, sexy, coolness of both artists.

In the clip, Lizzo and her entourage of fine menfolk and fellow curvy girls pay a visit to their favorite late-night fast food establishment, grab a quick bite and proceed to twerk it out in the parking lot. Rows of old school cars on hydraulics wobble to the hypnotic beat, and so do her crew of thickums who wiggle, jiggle and shake everything their mamas gave 'em. Lizzo also channels some of that Missy magic in the video, with women literally floating above and bouncing off of the vehicles like they're trampolines. Finally, Missy makes her guest appearance popping out the trunk of an old school heavy Chevy, delivering her ferocious flow. She joins Lizzo in the lot and they both f**k it all the way up.

Lizzo closes out the track proclaiming, “Girl run that s**t back!” and we agree with her sentiments. Coming in at just under three-minutes long, the festivities feel like they’re over before they’ve even started. Hit play and let us know if you’re going to keep your finger on that rewind button like we are.